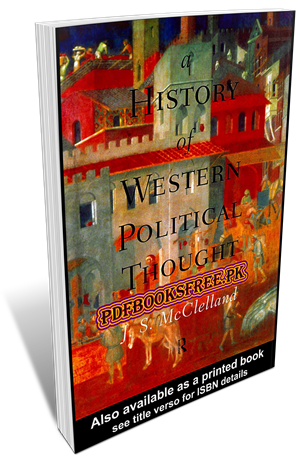 A History of Western Political Though Written by J.S. McClelland. History of Western Political Thought is an energetic, engaged and lucid account of the most important political thinkers and the enduring themes of the last two and a half millennium. J.S. McClelland traces the development and consolidation of a tradition of Western political thought from Ancient Greece through to the development of the modern state, the American Enlightenment, the rise of liberalism and the very different reactions it engendered. He discusses how a tradition beginning before Socrates might be said to have played itself out in the second half of the twentieth century.
McClelland’s aim is to tell a complete story: his definition of politics encompasses both power wielded from above and power threatened from below, and the sustained pursuit of this theme leads him to present an original and often controversial view of the theorists of the received canon and to add to that canon some writers he feels have been neglected unjustly.
A History of Western Political Thought will inform, challenge, provoke and entertain any reader interested in what people have had to say about politics in the last two and half thousand years, and why it matters.
J.S. McClelland is Senior Lecturer in Politics at the University of Nottingham. He has held visiting posts at the University of Indiana at Bloomington and Sacramento State University, California. His previous publications include The French Right: From De Maistre to Maurras and The Crowd: From Plato to Canetti.
This book is now available on Pakistan virtual library for reading and download. Check out the following links to read online or download the complete book in Pdf format to enjoy offline reading.