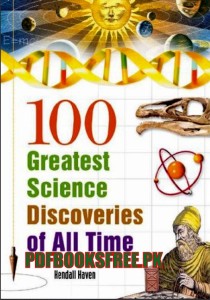 100 Greatest Science Discoveries of All Time

There are many areas of human development and many kinds of important discoveries not included here. For example, discoveries in art, culture, exploration, philosophy, society, history, or religion. It’s also excluded science discoveries that cannot be attributed to the work of one individual or to a small group of collaborators. Global warming, as an example, is a major research focus of our time. Its discovery may be critical to millions, if not billions of human lives. However, no one individual can be credited with the discovery of global warming. At a minimum, 30 researchers spread over 25 years each had a hand in making this global discovery. So it is not included in the list of 100 discoveries.

You will meet many of the giants of science in this book. Many, but certainly not all. There are many who have made major contributions to the history and thought of science without making one specific discovery that qualifies as one of the 100 greatest. Many of the world’s greatest thinkers and discoverers are not here because their discoveries do not qualify as science discoveries.

There are many worthy discoveries and many worthy scientists that did not make the final cut to be represented here. All of them are worthy of study and of acclaim. Find your own favorites and research them and their contributions.

Several entries include two discoveries because they are closely linked and because neither alone qualifies as one of the 100 greatest. However, considered collectively, they take on an importance far greater than their individual impact would suggest.

Enjoy these stories. Revel in the wisdom and greatness of these discoveries. Search for your own favorites. Then research them and create your own discovery stories to share. Visit the below mentioned links to read online and also download in pdf format for offline reading and references.