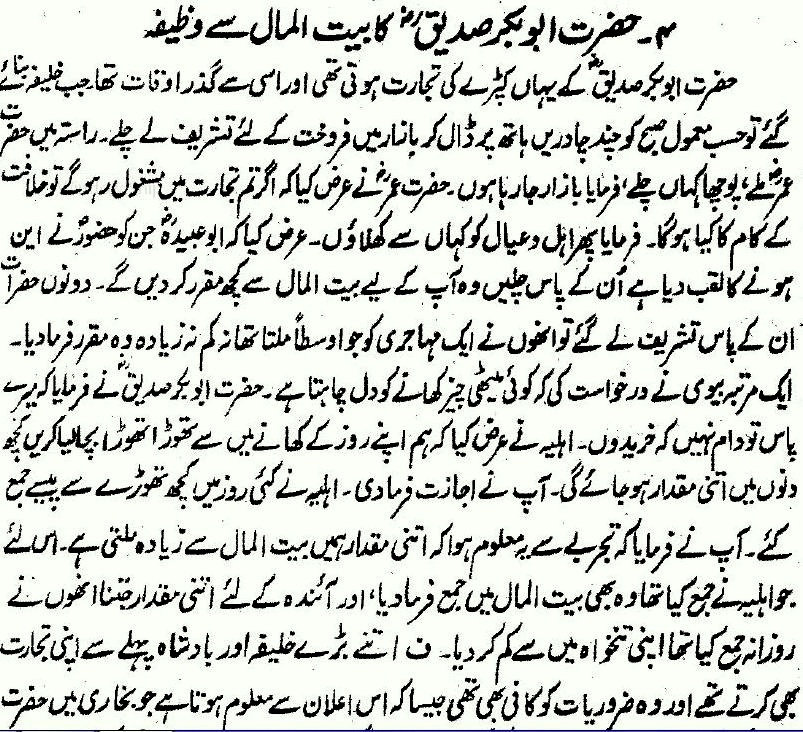 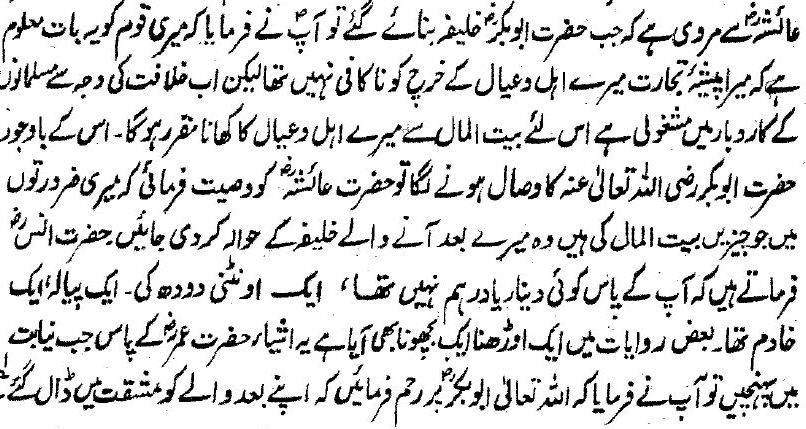 Story of Abu Bakr’s Daily Allowance form the Bayt al-Mal. Hazrat Abu Bakr (r.a) was a cloth merchant and lived by that trade. On the death of Rasulullah (sallallahu alaihi wasallam), people select him as the caliph. Next day with some cloth slung on his arms. He was going to the market as usual when. ‘Umar met him on the way. ‘Umar (radiyallahu anhu) asked him where he was going. Whe Abu Bakr (radiyallahu anhu) told him that he was going to the market he said, “If you get busy with your trade, who will carry out the duties of the caliphate?”

So Abu Bakr asked, “How am I to feed my family then?” ‘Umar suggested that they go to Abu ‘Ubahdah (who was in-charge of Bayt al-Mal) who would fix some daily allowance for him from the Bayt al-Mal. They both went to Abu Ubaydah. He fixed for Abu Bakr an allowance equal to that usually paid to an average Muhajir.

Once Abu Bakr’s wife said to him: “I would like to have a sweet dish.” Abu Bakr said: “I have no money to arrange for the dish.” His wife said: “If you permit, I shall try to save something daily from our allowance, which will some day make enough to enable us to prepare the sweet dish.” He agreed. A little money was saved in many days. When his wife brought him the money to make purchases for the sweet dish, he said: “It seems that we have received so much over and above our needs.” He deposited the saving in the Bayt al-Mal and, for the future got his allowance cut down by the amount saved by his wife.

Note: This great caliph and king had his own business which was enough for his needs. Thus the Hadith book of BUKHARI records his announcement which ‘A’ishah (radiyallahu anha) narrates: “When Abu Bakr was selected as caliph, he said: ‘My people know that my business was enough for my family’s. But now because I am caliph, I am busy with the work of Muslims. So my family’s food will be paid for from the bayt al-Mal.” Still, at the time of his death he told ‘A’ishah (radiyallahu anha) to give the things he had received form the bayt al-Mal to the person who would be caliph after him. Anas (radiyallahu anhu) says that he didn’t have any gold or silver, just a camel for milk, a bowl and a servant. According to some reports he had some bedding and a sheet also.

When all these were given to ‘Umar, his successor, he said: “May Allah ta’ala be merciful to Abu Bakr! He has set a precedent for his successors which is very hard to follow.”