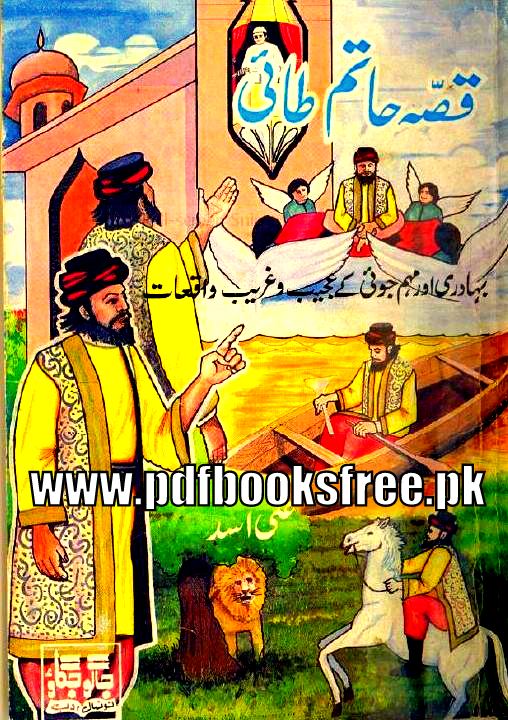 Qissa Hatim Tai Urdu moral novel for kids Authored By Haider Bakhsh Haideri. Hatim is powerful, Brave, Generous and sympathetic. He helps everyone. He is a courageous and daring. He helps people to Eliminates their sufferings. He offers his beef to the Tiger. He saves lives of babies wolves. He is rescued deer from the paws of wolf. People and animal takes benefits of his empathy and compassion. He puts his life in danger to simplify hard of a Syrian prince Munir. He makes seven journeys to solve the seven questions of Princess Hussan Bano and bear all kinds of difficulties and risk.

Do you know who he is? Did he is a monster, or did his is an animal? His name is Hatim Tai. Hatim is not a giant or monster, he is the human, but during their campaigns he faces this type of creations. Sometimes he meets with a creation which is half woman and half fish. Hatim looks a monster with nine hands, nine feet nine mouths and a flam of fire is coming out from his mouth. He also fined an animal with eight feet and seven heads. He meets with many pious elders, who grants him breads for his hunger and thirst. Hatem also faces fairies and magic during his missions. Hatim faces strange events and wonderful situations during his seven travels.

Haider Bakhsh Haidri has written Hatims seven campaigns narrative in a big fun in Urdu language for kids. Hope kids were definitely like to read and enjoy this book. Click on the below mentioned link to read online and download Qissa Hatim Tai in Pdf format for offline reading.