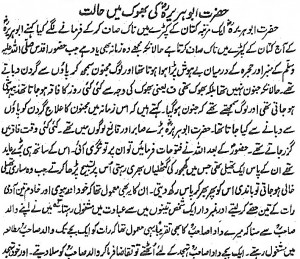 Story of Hazrat Abu Hurayrah in a State of Hunger

Once Abu Hurayrah (radiyallahu anhu) after wiping his nose with a piece of fine linen said to himself: “Look at Abu Hurayrah! He clean his nose with fine linen today. I remember the time when he used to lie down between the mimbar and the Nabi’s house. People took him to be suffering from epilepsy and put their feet on his neck. But there was nothing wrong with him, other than spasms of hunger.”
Note: Abu Hurayrah (radiyallahu anhu) had to remain hungry for days together. At times, he was overpowered with hunger so much that he fell unconscious, and people mistook this as an attack of epilepsy. Apparently in those days they treated epilepsy by placing a foot on the neck of the patient.
Abu Hurayrah (radiyallah anhu) is one of those people who suffered from extremes of want and poverty in the early days of Islam. He, however, saw better days in later years when Muslim conquests followed in succession. He was very pious and loved very much to perform nafl slah. He had with him a bag full of date stones. He used these stones for his dhikr. When the bag was empty, his maid filled it again with date stones. Somebody was always busy in salah in his house during the night, his wife and his servant taking turns with him in salah.
I have heard my father relate that my grandfather’s routine was very similar. My father would remain busy with his studies until an hour past midnight when my grandfather would wake up, insist on my father’s going to sleep and himself would stand up in tahajjud salah. He would wake up my father’s elder brother three quarters of an hour before fajr and would himself he down for a while in obedience to the sunnah.
My Allah ta’ala grant us the ability to follow them. Aameen.