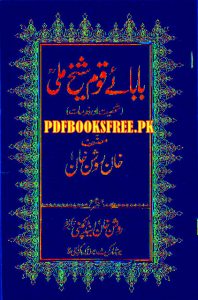 Baba e Qaum Sheikh Mali by Khan Roshan Khan. The present ” Baba e Qaum Shaikh Mali” provides short but comprehensive history and biography of the famous Pashton elder. Sheikh Mali was a prominent Yousafzai writer and historian, a minister of Malik Ahmad khan Yousafzai who lived before the time of Mughal emperor Akbar. He settled the revenue system of Yousafzai and wrote a book named ‘Daftar-e-Shaikh Mali’ on the topic of revenue and division of land. The book has not been obtained but was popular in the Yousafzai of swat and elsewhere.

It is believed that his work was kept secret even at the time of Khushal khan Khattak because the feudal lord wanted to finish the collective system of distribution of lands and to take the personal possession of them.
According to Khushal Khan Khattak,
There are two things in swat, one is hidden and the other one evident
the one is “Makhzan e Akhond Darwaiza, and the other is “Daftar of Shaikh Mali”
Shaikh Mali also wrote the history of Yousafazi tribes and their conquest of swat in 820 AH.
Roshan khan writes about sheikh Mali “He was a good writer and poet. Among his books, two Pashto books are known. One of them is said to have been written in prose, and the other is in verse. Both of the books have the same name “Fatah-e-swat”. These books are on the topic of history.”
Roshan khan refers to “Ameen Ullah Khan” who says that Sheikh Mali book “Da Swat Fatah” is the first book of Pashto which is available in the “British Museum of London”
Roshan khan also refers to Abdul Salam Khan as saying.”The first book of Pashto is “Fatah-e-swat”, which was written by Sheikh Mali and is available in my library”
Baba e Qaum Sheikh Mali history book in now available on Pakistan Virtual library for online reading and download. Check out the following links to read online or download it in Pdf format for offline reading and references.