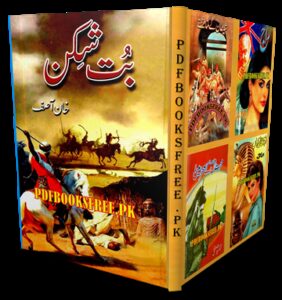 Butshikan Novel Authored By Khan Asif. The present book “Butshikan” is a historical novel that contains the life story of the famous Muslim ruler of Ghazni and great conqueror “Mahmoud Ghaznavi” in the Urdu language.
Sabkatgin, who was sold in the “slave bazaar” of Bukhara, did not even know that Allah Almighty had written the kingdom of Ghazni in his destiny. So who could erase this phrase written on a Preserved Tablet? Mahmud Ghaznavi was the son of the same slave and whom Allah bestowed the highest honor of “Idol-breaker”.

Although the Lord of the Worlds wrote great victories in the destiny of “Mahmud” and this brave man planted the flags of victory from Ghazni to India. But the conquest of “Somnath Fort” was one of his greatest achievements. The courage and perseverance shown by Mahmoud Ghaznavi and his top salesmen are unparalleled. He not only smashed the idol of “Somnath” but also trampled on the oldest idol of the people of India “Jag Som”.

Allah helped this idol-breaker in the land of disbelief and gave the Mujahideen of Islam dominance over the idolaters. History has shown that infidels used to tremble with fear when they heard the name of Mahmud Ghaznavi. Then the stories of the bravery and greatness of the believers were spread all over Meerut, Mathura, Kalinjar, Gwalior, Ajmer, and Gujarat.

When the idol-breaker, who enlightened the land of disbelief with the eternal light of Islam, shattered Somnath with the stroke of La ٰlaha ٰllallah, and only the words of Kalma Shahadat were heard from the heavens and the earth. And its historical words were echoing in the hearings of the disbelievers. “We, the believers, are not idol-sellers, we are idol-breakers.”