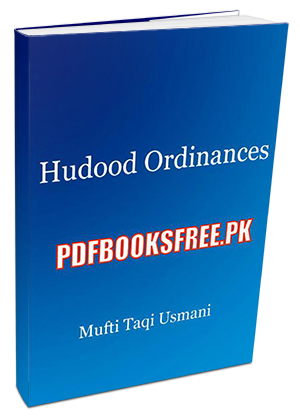 Hudood Ordinances English Authored by Justice Mufti MuhammadTaqi Usmani. Islamization of Laws in Pakistan: The Case of Hudud Ordinances translated into English by Khalid Rehman.Ever since the creation of Pakistan, the issue of Islamization has been a subject of debate both within and outside the country. Islamization of laws is an important element of the overall concept of Islamization in the country, and this aspect generated great discussion and deliberations in 1979 when the government introduced Hudud Laws (Ordinances).

An objective study of the views and response to the Ordinances indicates the existence of three opinions. There are people who think that since hudud are prescribed in the Qur’an and Sunnah, one cannot think of changing or amending them. Some are opposed to the very idea of Islamization, so they call for a total repeal of the Ordinances.

The third group consists of those who support the idea of Islamization but feel that the Ordinances might be in need of review and amendments, even though the hudud are certainly divinely ordained. They are of the view that, surely, it is the Qur’an and Sunnah that prescribe hudud, but their translation into laws is a human effort that needs continuous review to adjust to the demands of changing times.

This analysis, with its focus on the Hudud Ordinances, seeks to help in creating an understanding of the entire debate on Islamization of laws in Pakistan. The task is onerous, delicate and complex. Underscoring the importance of implementation of Islamic laws, and refuting the allegations of opponents, the article also identifies some of the areas in the Hudud Ordinances, specially the Hudde Zina Ordinance, that are in need of reform.

The analysis is divided into three parts. The first part discusses briefly the importance of the injunctions of Islamic Shariah the second part addresses the questions and doubts that are raised, furiously and frequently, about the Hudud Laws; and the last part focuses on those aspects that, to this scribe, are in need of review, amendment and reform.

This book is now available here on Pakistan virtual library in high quality Pdf document for the study of our visitors. Check out the following links to read online or download the complete book in Pdf format and enjoy offline reading.