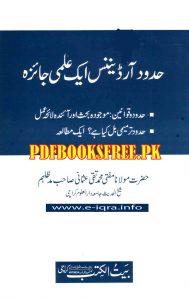 Its implementation has been an instructive experience. During the 27 years since its enforcement the Ordinance has been a subject of controversies. A number of people welcomed it, but considerable critical literature questioned the punishment of Rajm, ambiguity about Zina and Zina bil Jabr, the prescribed discriminatory criminal procedure and definition and identification of Hudud crimes. In media, opinions about the Ordinance have been divided into three groups: those who wanted status quo, those who wanted it to be repealed and those who wanted necessary amendments. The opinion in favor of status quo argued that Hudud laws were divinely revealed and only the Westernized segments of Pakistani society were calling for its repeal. Others argued that Hudud laws were not divine, they were laws framed by the jurists.