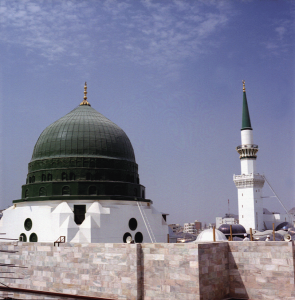 For nine years, since his declaration by Allah ta’ala as a Nabi, Rasulullah (sallallahu alaihi wasallam) had been delivering the message of Allah ta’ala in Makkah and making great efforts t0 guide and reform his community. Except a few persons who had either embraced Islam or who helped him, through not accepting Islam, all the rest in Makkah left no stone unturned in persecuting and  making fun of him and his sahabah. His uncle Abu Talib was one of those kindhearted people who helped him, in spite of his not accepting Islam.

The following year, on the death of Abu Talib, the Quraysh got a free hand in stopping people from accepting Islam and harming the Muslims. At Ta’if the second biggest town of Hijaz, there lived “Banu Thaqif”  a clan strong in number. Rasulullah (sallallahu alaihi wasallam) left for Taif Town in the hope of winning them over to Islam., thus saving the Muslims from the persecution of the Quraysh, and also establishing a base for the future propagation of Islam. O reaching Taif Town, he visited the three chiefs of the clan separately, and placed before each of them the message of Allah ta’ala, and called upon them to stand by his side. Instead of accepting his message, they refused even to listen to him and , notwithstanding the famous Arab hospitality, each of them treated him most insultingly and rudely. They plainly told him that they did not like his stay in their town.
The Nabi (sallallah alaihi wasallam) had expected a polite, even a cordial treatment and due courtesy in conversation from them as they were the heads of the clan. But one of them said: “Hey. Allah has made you a Nabi!” The other said with derision: “Could Allah not lay His hand on anyone else, other than you, to make him His Rasul?” The third one said: “I do not want to talk t you, for if you are in fact a Nabi then to oppose you is to invite trouble, and if you only pretend to be one, why should I talk with an imposter?”

Rasulullah (sallallahu alaihi wasallam), who was a rock of steadfastness did not lose heart over this treatment from the chiefs, and tried to approach the common people, but nobody would listen to him. Instead they asked him to clear off from their Town and go wherever else he liked. When he realized that further efforts were of no use, he decided to leave the town. But they would not let him leave in peace, and set the street children after him to hiss, make fun of him and to stone him. He was so much pelted with stones that his body along with his shoes was covered with blood. He left the town in this pitiable state. When he was out of the town, and safe from the mischief mongers, he made du’a to Allah ta’ala thus:
Advertisement

“O my Allah! To You I complain of my weakness, and lack of resources and my being unimportant in the eyes of people. O Most Merciful of all those who show mercy! You are the Lord of the weak, and You are my own Lord. Whom are You turning me over to? To a stranger who makes an angry face at me, or to an enemy whom you have given control me? If You are not angry at me then I do not care, still I find more room for myself in Your making things easy for me. I seek shelter from Your anger and displeasure in Your Nur; the Nur by which all darknesses light up and by which everything in this world and the akhirah becomes well. It is necessary to remove the cause of Your anger until You are pleased, and other than You there is no strength nor power.
The Master of the universe was moved by this du’a, and the angel Jibra’il (alayhis salam) appeared before Rasulullah (sallallahu alaihi wasallam), greeting him with assalamu-alaykum and said: “Allah ta’ala knows all that has passed between you and these people. He has deputed an angel in charge of the mountains to be at your command.”
Saying this Jibr’il (alayhis salam) presented the angel before Rasulullah. The angel greeted Rasulullah and said: “I am at your service”. If you wish, I can command the mountains overlooking this town on both sides to collide with each other, so that all the people between them would e crushed to death, or you may suggest any other punishment for them.”
The merciful and noble Nabi (sallallahu alaihi wasallam) said: “Even these people do not accept Islam, I do hope from Allah ta’ala that ehere will be persons from among their descendants who would worship Allah ta’ala and serve His cause.”
Note: Such was the conduct of our noble Rasul (sallallahu alaihi wasallam), whom we claim to follow! We get so much irritated over a little trouble or mere abuse from somebody that we keep on torturing and taking our revenge throughout our lives in every possible manner. Is this proper for people who claim to follow the generous Nabi (sallallahu alaihi wasallam)? Look, even after so much suffering at the hands of the Taif mob, he neither curses them  nor does he wish for any revenge, even when he has the full opportunity to do so.
← Previous Post
Next Post →