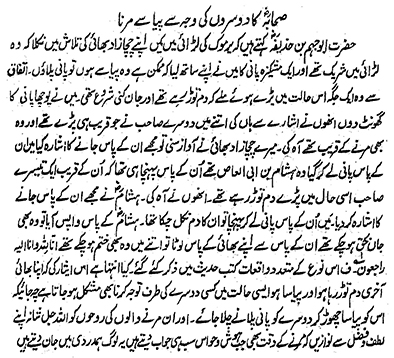 Sahabah Dying Thirsty for Others During The Battle of Yarmuk

Abu Jahm Ibn Hudhayfah (radiyallahu anhu) narrates: “During the battle of Yarmuk, I went out in search of my cousin, who was in the front line of the fight. I also took some water with me for him. I found him in the thick of battle in the last agony of death and I advanced to help him with the little water I had. But, soon another sorely wounded soldier beside him groaned. Thereupon my cousin tned his face, and beckoned me to take the water to that person firs. I went to this other person with the water. He turned out to be Hisham Ibn Abi al-Aas (radiyallahu anhu). But I had hardly reached him, when we heard the groan of yet another person lying not very far off. Hisham, too, motioned me in his direction. Alas, before I could approach him, he had breathed his last. I made all haste back to Hisham and found him dead as well. Thereupon, I hurried as fast as I could to my cousin, and be in the meantime had also joined the other two; (inna lillahi wa inna ilayhi raji’on).
May incidents of such self-denial and sacrifice are recorded in the books of Hadith. This is the last word in self-sacrifice, that each dying person should forego slaking his own thirst in favour of his other needy brother. May Allah Ta’ala bless their souls with His choicest favours for their sacrifice for others even at the time of death, when a person seldom has the sane to make a choice.
← Previous Post
Next Post →