Devotion to Salah, Stories of The Sahabah, True Stories 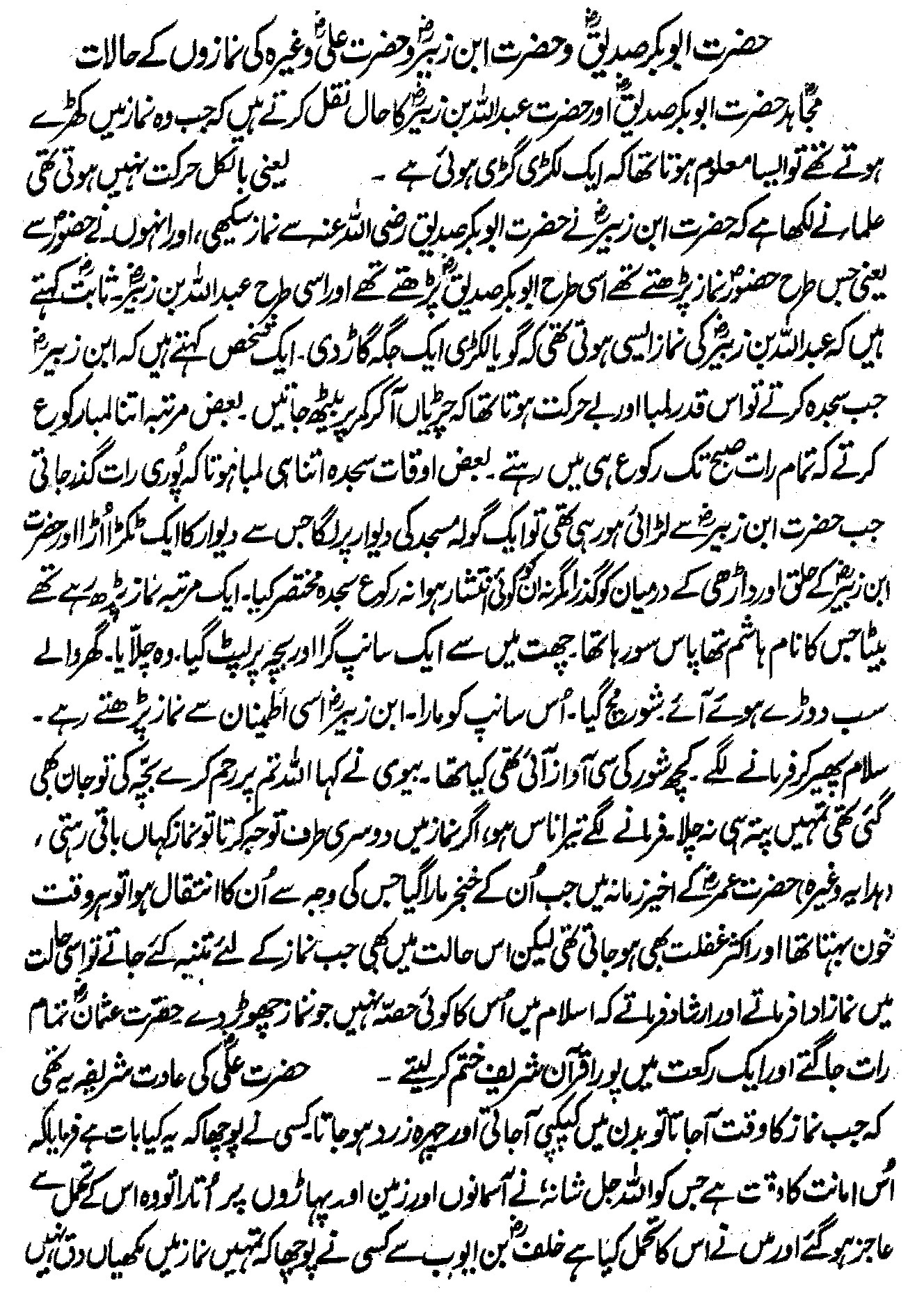 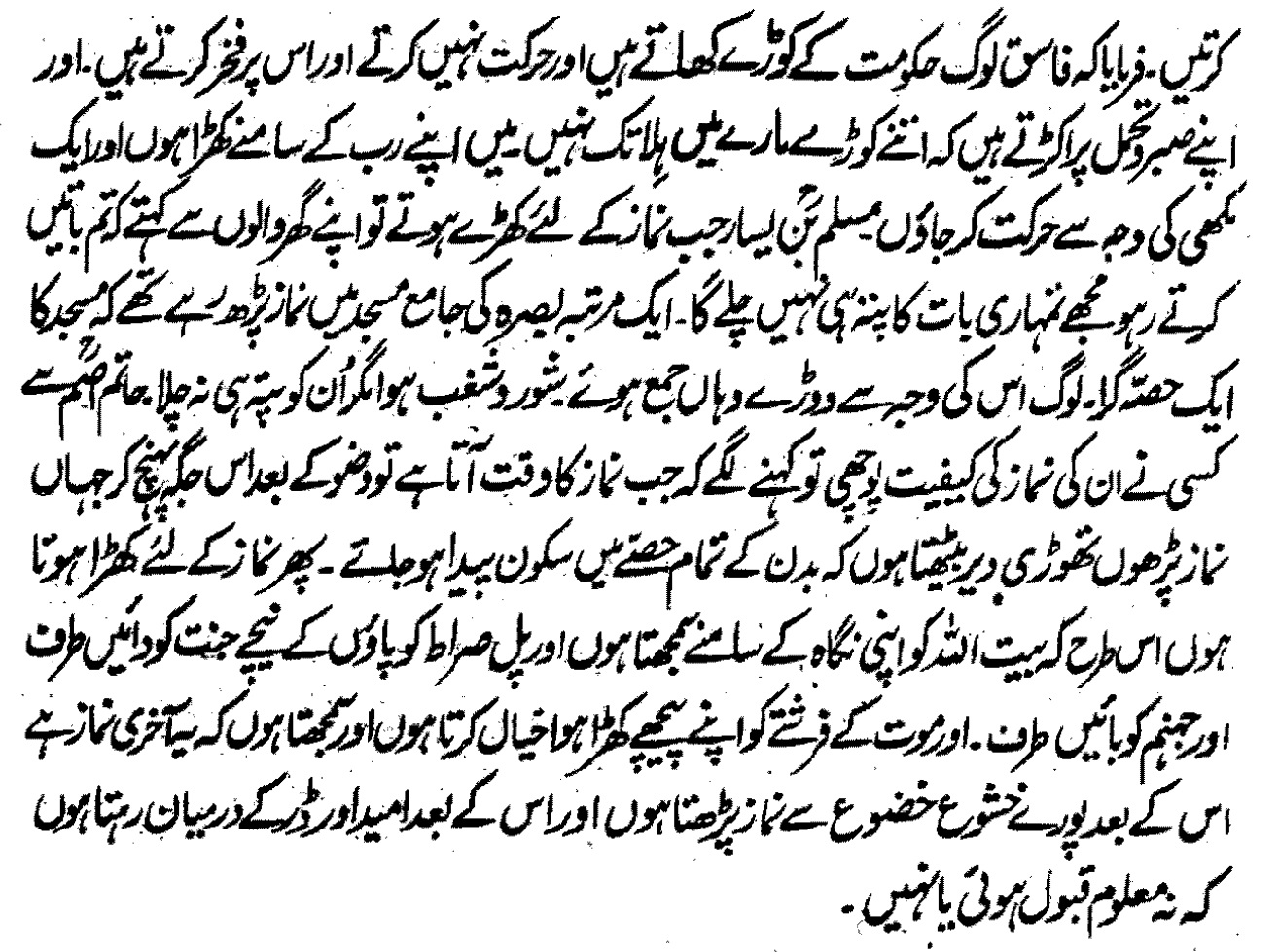 Mujahid, describing the salah of Abu Bakr (radiyallahu anhu) and that of Abdullah Ibn Al-Zubayr (radiyallahu anhu)  says: “They stood in salah motionless like pieces of wood stuck in the ground.”
Ulama agree that Abdullah Ibn Al-Zubayr (radiyallahu anhu) learnt to say his salah from Abu Bakr (radiyallahu anhu) who in turn learnt it direct from Rasulullah (sallallahu alaihi wasallam).
It is said about ‘Abdullah Ibn Al-Zubayr that he remained in sajdah for so long, and kept so motionless, that birds would come and sit on his back. He would sometimes remain in sajdah or ruku all night long. During an attack against him, a missile came and hit the wall of the masjid wherein he was saying his salah. A piece of masonry flew from the wall and passed in between his beard and throat. He neither cut short his salah, nor was he the least perturbed.
Once he was saying his salah while his son Hashim was sleeping near him. A snake fell from the ceiling and coiled round the child. The child woke up and shrieked, and the whole household gathered round him. They killed the snake after a great hue and cry. Ibn Al-Zubayr, clam and quiet, remained engaged in his salah all the while. When he had finished it , he said to his wife: “I heard some noise during my salah, what was that?”
His wife said: “May Allah Ta’ala have mercy on you! The child’s life was in danger, and you took least notice of it.”
His answer was: “Had I turned my attention to anything else, what would have remained of the salah.”
Umar (radiyallahu anhu) was stabbed at the close of his career, and this same wound caused his death. He bled profusely and remained unconscious for long intervals. But when he was told that it was time for salah, he would perform it in that very condition, and say: “There in no portion in Islam for the person who discards salah.”
Usman (radiyallahu anhu) would remain in salah all night long, finishing the whole of the Quran in one rak’ah. It is reported about Ali (radiyallahu anhu) that he would turn pale and tremble at the time of salah. Somebody asked him the reason, and he said: “It is the time to discharge that trust which Allah Ta’ala offered to the skies and the earth and the hills, but they shrank from bearing it, and I have assumed it.”
Somebody asked Khalf Ibn Ayyub: “Do not the files annoy you in your salah?” His answer was: “Even the sinful persons patiently bear the lashes of the government, to boast of their patience afterwards. Why should I be made to move about by mere files when standing in the presence of my Sustainer?”
When Muslim Ibn Yasar would stand up for salah, he would say to his family: “Keep on talking, I shall not hear what you say.” Once he was saying his salah in the main masjid of Basrah. A Part of the masjid wall fell down with a crash’ and everybody ran pell mell for safety, bu he never even heard the noise.
Somebody asked Hatim Al-Asamm as to how did he say his salah. He replied: “When the time for salah comes, I perform my wudu and go to the place where I have say my salah. I sit down for some time, till all the parts of my body are relaxed. Then I stand up for salah, visualising the Ka’bah in front of me, imagining my feet upon the bridge over jahannam, with jannah to my right, and jahannam to my left, and ‘Izrail’ (the angel of death) close behind me, and think that it may be my last salah. Then I say my salah with full sincerity  and devotion. And in finish my salah between fear and hope about its acceptance.”
← Previous Post
Next Post →