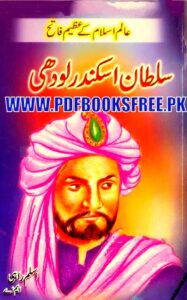 Sultan Sikandar Lodhi History in Urdu Authored By Aslam Rahi M.A. Sikandar Lodi the 2nd sultan of the Lodhi Dynasty, the last dynasty in Delhi, which was set up in 1526 from 1451.  After the death of Sultan Nasir Uddin Muhammad Shah Tughlaq in 1412, Delhi Saltanat was in violence and riots for several years and Tughlaq family did not succeed to buil a strong government. Then in 1451 The Pathan Governor of Sarhind and Lahore Bahlol Lodi captured Delhi and once again formed a strong government called the Lodhi Dynasty and Sultan Bahlol Lodhi was became the first Sultan of the dynasty.

Sultan Sikandar Lodhi (Nizam Khan) was the second son of Sultan Bahlol Lodhi and was the second sultan of Lodi Dynasty of Delhi from 1489 to 1517. He was the founder of Agra city called Sikandar Abad at that time. Sikandar made Agra his capital instead of Delhi. He was a man of simple nature did not like ornate royal dress to proceed. He was always persists to act for the prosperity of the people and was happy to distribute and supply clothes, shawls and foods to the needy people in winter.  A list of needy and poor people was presented before him after every six months and he was issued allowances for themes.

This book is a biography of the great King Sultan Sikandar Lodhi, in which his life has been described in brief and concise manner in Urdu language. Visit the below mentioned link to read online and download the complete biography and history of Sultan Sikandar Lodi in Pdf format for offline reading.