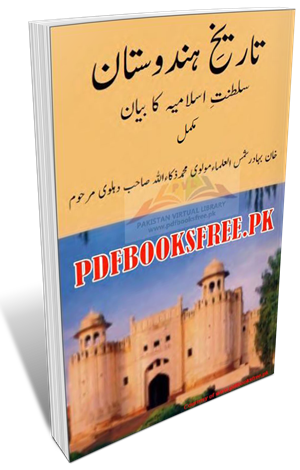 Tareekh e Hindustan Complete 10 Volumes Authored By Khan Bahadur Shams ul Ulama Molvi Muhammad Zakaullah Dehlvi (Late). Tarikh e Hindustan is an authentic historical document which cover the complete and detail history of India in Urdu language. India is a very rich area of culture and civilization. If you want to know about the history of India, you must read this book. Because this book tells you the secrets and invisible facts from the begging of the Islamic kingdom to the end of Mughal empire. Tarikh e Hindustan book is a huge document divided into 10 volumes. This book is a rare and precious gift for those who are interested in the history of India.

Khan Bahadur Shamsul Ulema Maulvi Mohammad Zakaullah Dehlavi was an amazing soul; much more amazing and substantial than even his title-riddled nomenclature would suggest. 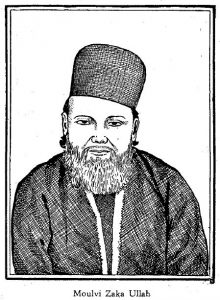 The naysayers, if any, may well be referred to the astounding number of published books against his name. There were 124 to be precise. For someone who died at age 78, this means more than two books every year for six long decades of his adult life.

The story, however, is not over yet. Moving away from the quantity aspect, the variety of subjects touched by Zakaullah Dehlavi is equally remarkable. In fact, much more remarkable, with 82 of his titles dealing with arithmetic, geometry and algebra alone. Another 14 deal with matters of physics, while his seminal attempts at history resulted in five titles spread over 18 volumes. The remaining 23 of his books related to ethics, morality and literature.

It is hard to find a more multidimensional, multi-volume and prolific author in the subcontinent who could do justice to the wide-ranging strains in his work. Unlike most uni-dimensional scholars in modern times, Zakaullah Dehlavi was a true descendant of distant Muslim savants who graced the globe with their presence in the first half of the second millennium. In fact, he was one up on them in the sense that the idiom of his writings, whenever possible, was more literary than scholarly, making it palatable to even those who might not have a direct interest in the subjects he touched. He was a truly blessed wielder of the pen, and it is a great service on the part of the publishers to make his writings available to the modern reader through photo-prints of the original.

The preface which is part of the first volume is in itself enough to impress the reader, reflecting the wide area of knowledge under the belt of the author. Tracing the roots of historiography, he has dilated on various arguments put forward in this regard by the likes of Friedrich Hegel of Germany (1770-1831), Thomas Carlyle of Scotland (1795-1881), Sigmund Freud of Austria (1856-1939) and, of course, Ibne Khaldun (1332-1406), the Arab without whom no discussion of history with any degree of substance can ever be complete; a fact that has interestingly been acknowledged more by the West than the East. The dexterous handling of such wide-ranging views by Zakaullah Dehlavi is a clear testament to his grip on the subject.

When first published some ninety years ago, this titanic work on the history of Muslim rulers in the subcontinent was spread over ten volumes. In its reprinted form, it has been put together in five by way of merging two or three volumes for practical convenience. This takes nothing away from the flow of the text. In fact, it adds to it.

Starting off with a brief history of Muslims from the days of the Prophet to the Abbasids, the text flows down to the subcontinent, which, as the title clearly suggests, serves as the main course. From Mohammad bin Qasim to Bahadur Shah Zafar, it is a tale not just of the rulers, but also of peoples and places, who appear in a properly sequenced chronological order.

The modern reader, conversant with the latest debates in history, may not always agree with the conclusions drawn by the author, but that is never the target of such undertakings. Authentic historical facts are all there bound in an unbiased text, and the reader is free to form and hold his own opinion. Nowhere in the text the author has tried to be unnecessarily opinionated or to force an argument down the throat, and deserves due credit for it.

The argument touched by the author in the concluding volume about the impact of the Muslim invasion of the subcontinent and the prolonged rule of the Muslims is bound to find favour with the reader. The author has been honest enough to concede that it is almost impossible for either the Hindus or the Muslims to take an objective view of the issues involved. Therefore, he has quoted extensively from third-party sources to prove his assertions. Again, the reader would not feel being forced into agreement by Zakaullah Dehlavi. He has presented his case in favour of the Muslims, leaving the final verdict in the hands of the individual reader.