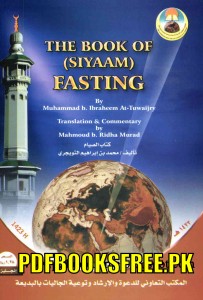 The Book of Siyaam Fasting

The Book of Siyaam Fasting” Written by Muhammad bin Ibraheem At-Tuwaijary and translated into English by Muhammad Ridha Murad. Fasting is the fourth pillar of Islam. Allah enjoined it as an obligatory act of worship during the second year of Hijrah. The meaning of Fasting: It is refraining from eating, drinking, and similar things from dawn to sunset with the intend on of fasting.
Allah has prescribed Fasting to the Muslim Ummah as He prescribed it to previous nations. Allah, the Exalted, has enjoined fasting on the Muslims for great wisdom and lofty objectives of which are:
1) The fear of Allah, the Exalted, and piety
2) Fasting trains the Muslim to assume responsibility, and endurance.
3) Fasting teaches man tolerance, self-restraint, truthfulness, and beneficence.
4) Fasting also makes man share the suffering of his Muslim brothers, and expend in charity to the poor and needy, thus the brotherly love is materialized among all Muslims through which all enjoy good life during this noble month.
Fasting in Ramadan is sphere of worship and obedience to Allah. In Ramadan, the gates of Jannah are opened and the gates of Hell are closed, and the Satans are chained. In it too, there is the Night of Decree, which is better than a thousand months spent in worship. The Night of Decree has a great excellence, whoever spends it occupying himself with acts of worship out of belief, and Allah would forgive his previous sins. The Night of Decree falls in the last ten days of Ramadan.
Read in English language, download in pdf format to read offline.