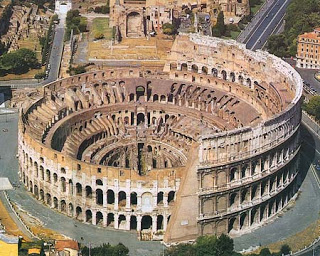 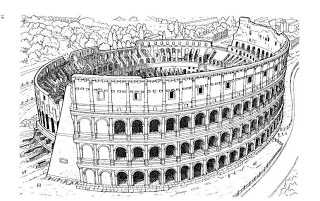 The Colosseum Arena of Rome

The Colosseum is located at Rome was a huge elliptical stadium with an area of about 615 feet. It was built by the emperor Vespasian in 10 years around 70 A.D. It was 160 feet high, with four stories and seating for 50000 spectators. The spectators entered through seventy six entrances and climbed raps to their seats. Women and poor people stood or sat on wooden benches in the fourth tier. A large colorful awning could be stretched overhead to keep the sun off. Below the wooden arena floor were rooms and passageways where the wild animals and gladiators were kept. Shows often lasted all day, and included comedy, exotic animal shows and gladiator fights. After the opening ceremonies in A.D 80, Hundred days of spectacles were held in which hundreds of animals and gladiators were killed. The gladiator fights were outlawed by the Emperor Honorius in A.D 404, animal combats continued anther century.