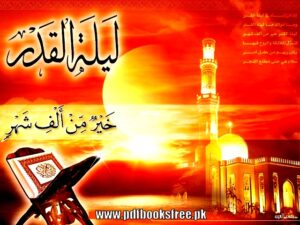 The Origin of Laylat Al-Qadr

Regarding this night, in a Hadith reported by Anas (rdiyallahu anhu) in al-Dur al-Manthur, Rasulullah (sallallahu alaihi wasallam) is reported to have said: “Laylatal qadr was granted to this ummah (of mine) and not to any other ummah before this.”
As regards the reason for the granting of laylat al qadr, various views are held. According to some Hadiths. one reason is given thus: Rasulullah (sallallahu alaihi wasallam) used to ponder over the longer lives of peoples of the past ages and, when comparing them with the much shorter lives of his ummah, he became very sad since, if his ummah wished to complete with people before them, then because of their shorter lives, it would be impossible for them to either copy or surpass the previous ummahs in the doing of righteous deeds.
Therefore, Allah ta’ala, in His infinite mercy granted them this night of great blessings. This means that, if any fortunate person of this ummah during his life-time spends ten such nights in the worship of his Creator he would have gained the reward of worship of Allah for eight hundred and thirty three years and even more.

Another report states that Rasulullah (sallallahu alaihi wasallam) once related to the sahabah the story of a very righteous man from among the Bani Isra’il, who spent one thousand months in Jihad. on hearing his, the sahabah felt that they could not attain the same reward, whereupon Allah Ta’ala granted them this night.Still another report states that it so happened that our Nabi (sallallahu alaihi wasallam) once spoke of four anbiya from among the Bani Isra’il, each of whom spent eighty years in Allah Ta’ala’s sincere worship and not disobeying in the least. They were Nabi Ayyub, Zakariyya, Ezekiel and Yusha (“alayhimussalam”). The Sahabah heard this, wondering how to copy their achievements. Then the angel Jibra’il(alayhissalam) appeared and recited Surah qadr wherein the blessings of this particular night were revealed. There are other reports too, explaining the the origin of the laylat al-Qadr. But, no mater which of these we accept, the important fact remains that Allah Ta’ala has granted us this night, as a great favour, and how fortunate are those divines who have never missed worship in this night.  As to which particular night it is , here again approximately fifty different views are reported. It is not easy for me to enumerate them all, but the most generally accepted versions following pages of this chapter. Because the Quran itself tells us of this night, we shall commence with a short commentary of Surah al-Qadr.

We have indeed revealed this (message in laylat a-qadr (al-qadr 1).

Reference here is made to the fact that, on this specific night, the Quran was copied from its original and brought down to the first sky. The mere fact that the Quran was revealed on this night would  have been sufficient to ensure its greatness. But, apart from this fact, it is also noted for many other nights. In the very next ayah, by way of incresing our interest in the matter under discussion, a question is asked:
And what will explain to you what laylat al-qadr (al-qadr 2).
In other words, the question asked here is : Have you any knowledge as to the greatness and importance of this night? Have you any knowledge as to great favours and bounties that go with it? The next ayah proceeds to explain  its greatness:
Laylat al-qadr is better than a thousand months (al-qadr 3).
Therein come down the angels and the spirit (souls) with Allah Ta’ala’s permission, on every errand (al-qadr 4)By Allah’s permission, come down on the earth for blessed tasks (al-qadr 5)
Peace reigns until the break of dawn (al-qadr 5)
← Previous Post
Next Post →