Great Islamic poet and philosopher, is called the “Greatest poet of the East”. Iqbal devoted himself to the cause of Islamic propagation though his poetry. He gave a new message of hope to the Muslims provided they make efforts and try to live as true Muslims. According to Allama Iqbal Islam is the only way left open for the Muslims. His famous address at the All India Muslim League session at Allabad in 1930 was the foundation stone of a separate Muslum state later named Pakistan. This versatile genius attained distinction in politics, poetry, ethics, education, prose, Jurisprudence, and preaching. 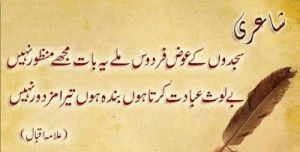 His work include Asrar-e-Khudi, Bang e Dara, Bale Jibreel, Zarbe Kalemm, Arman e Hijaz ,Javed Nama, Payam-e-Mashriq. Moreover his work are included in a book namely Kuliat-e-Iqbal. This person tried his best to change the life condition of the Muslims. The Muslims of India & Pakistan subcontinent are highly indebted to this sage who did a great contribution in re-awakening them and their fate. He was born on November, 9, 1877 at Sialkot.