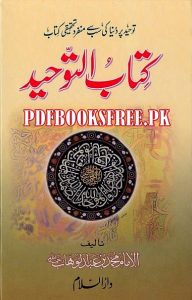 Kitab Ut Tawheed Urdu by Imam Muhammad bin Abdul Wahab. Urdu translation of the Word most popular and most authentic book on the topic of Islamic Monotheism. Translated into Urdu by Professor Saeed Mujtaba Saeedi.

What is Monotheism (Tawheed)?

Monotheism (Tawheed) is the first pillar of Islam. When we learn Islam, we come to know that the Arabic word Tawheed has a large meaning, but to summarize it then it basically means the oneness and the uniqueness of God, i.e. Allah (Subhanahu wa Ta’ala).

Everything and everyone understands Tawheed (Monotheism) but people will either accept it or people will reject it. Tawheed is really the essence of the message of every Prophet and Messenger of Allah.
Linguistically, Monotheism (Tawheed) is to make something single – make it one. This cannot take place except with a negation and an affirmation, negating the ruling from other than what you want to single out, and affirming the ruling to it.

So a person’s monotheism will not be complete until he testifies that there is no deity worthy of worship other than Allah (La Ilaaha Ilallaah) – so he negates the worship of other than Allah and affirms it to Him only.

The legislated meaning of Monotheism: