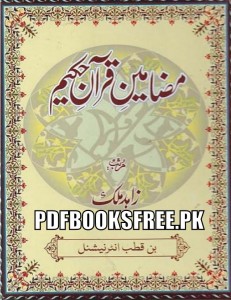 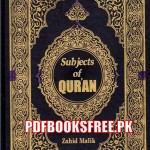 Mazameen e Quran Subjects of the Quran Authored by Mr. Zahid Malik. The present book embodies an earnest effort to present a comprehensive and exhaustive survey of several themes with which the Qur’an deals. It is designed to help the writers and thinkers on character and content and meaning of the Holy Quran to get a the specific passage or the verse in order that he can see it in the context of similar passages or verses spread out in the text of the Quran. The aim of the exercise is to view it in its totality and when seen thus, the resulting impression would tend to show that the Quran is free from any internal contradiction. Further such a way of looking at the various Ayats of the Quran would deepen the reader’s understanding to an extent that what appeared to be controversial verses at first sight from a body of coherent, self-consistent and complete exposition of the subject matter with which they deal. The superficial view that is often taken is that the arrangement of the various verses of the Quran is unscientific, in that diverse themes are dealt with in disconnected, disjointed and desultory manner. This view, in the light of modern research, is giving way to the perception that there is a serious purpose which lies at the back of the specific Quranic mode of presenting the revealed truth in a verbal form. The arrangement of verses to begin with invites and inevitably compels the reader to look at the Quran steadily and regard it as a whole.

Despite the fact that the Quran as a whole is a magnificent articulation of the revealed word of God, it becomes necessary to compile publications like the present one to supplement the conventional Tafsirs (commentaries) of the Quran, to indicate the exact placement of Its verses by giving copious references to the chapter and verse of the various statements contained in the Quran concerning a particular theme just to facilitate the task of readily having access to all it has say on a particular verse in the Quran. The present book makes it possible for a research student to get at all the relevant verses of the Quran connected with a particular topic, and wherever possible to support them by cross reference to the literature on Hadith so that no important utterance either in the Quran or of the Prophet excapes notice. Books like Mazamin e Quran e Hakim published by the present editor will continue to be indispensable for the scholars and thinkers interested in understanding the grandeur, authority and sanctity of our sacred literature.

Mr. Zahid Malik has done well to identify the important themes and with painstaking care has brought them in sharp focus so tha t diverse, relevant and pertinent Ayats of the Quran and cross references to the literature of the Hadith can be spotted in the shortest possible time. Judged by any standard, the quality of work that has been put into the compiling of the present reference book in superb. It is free from any lacuna or inaccuracy. Its presentation in English language will capture the attention of the worldwide scholarship and help it to probe into the variegated facets of the text of the Quran in order to be able to understand what it has to say on any conceivable question. There are no doubt various book which have attempted to do the same, but the performance of the learned editor of the present book is much more impressive, even as it is comprehensive and reliable.