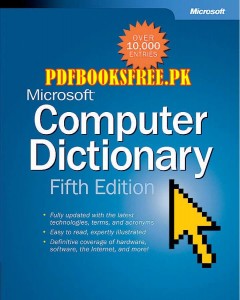 The Microsoft Computer Dictionary, Fifth Edition is designed to be a comprehensive and authoritative source of definitions for computer-related terms and abbreviations. The dictionary includes terms drawn from a wide variety of topics relevant to computer users, including software, hardware, networking, data storage, graphics, games, information processing, the Internet and the World Wide Web, gaming, history, jargon and slang, organizations, programming, and standards.

Although this book covers nearly every aspect of computing, it does not include entries on most companies or on most makes and models of computers, nor does it contain entries on most application software products. The few exceptions to this rule of thumb are key companies and products that have a historical or universal importance within the computing industry.

This dictionary emphasizes terminology that the average computer user will encounter in documentation, online help, computer manuals, marketing and sales materials, the popular media, and the computer trade press. Because most computer users operate personal computers and desktop systems at home, work, or both, the majority of the entries in this dictionary cover the terminology used in describing and working with these systems. However, some specialized or highly technical language is included that pertains to areas of industry, academia, software and hardware development, and research. These terms have been included because they have a bearing on more common computer terminology or because they are of historical significance.

The fifth edition of the Microsoft Computer Dictionary has been revised and expanded to include over 10,000 entries, reflecting the many advances in the computer field and including several areas that have come into prominence in the public eye, such as networking, Web authoring, and new technologies, such as .NET. The content from the Year 2000 appendix has been integrated into the body of the dictionary and a new appendix on emoticons and instant messaging symbols has been added.

Click here to buy hard copy of this book