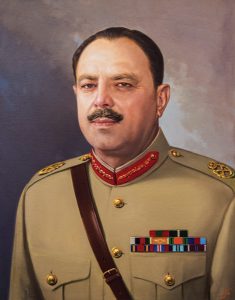 First Pakistani Commander In Chief of Pak Army. He was born in N.W.F.P (Khyber Pakhtunkhwa), educated at the Muslim University Aligarh before he wen to Royal Military College, Sand Hurst, where he was commissioned in 1928.  Early in 1934, Ayub Khan was made Colonel and was promoted as Brigade Commander. He was promoted as Major General in 1948 afterwords Adjutant-General.
Ayub took over as C-in-C on 18th January 1949, Defense Minister, as well from November 1951 to August 1955. On October 10th, 1958 he was appointed Chief Martial Law Administrator of Pakistan. On 27th of October the same year Ayub Khan deposed President Skander Mirza and took over as new President.
He ruled Pakistan for 10 years and fought 1965 was with India which ended in Pakistan’s favour. His rule by stern hand forced him resign on March 23rd 1969 in favour of Yahya Khan. He died in 1974. His age can be consider at the golden period of Pakistan.
← Previous Post
Next Post →