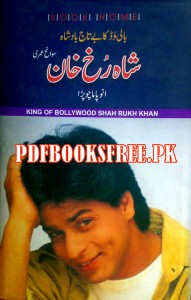 Shahrukh Khan Biography Urdu authored by Anupama Chopra. This book described complete autobiography and film career history of the Bollywood star and most famous film actor Shahrukh Khan in Urdu language.
Shah Rukh Khan, is an Indian film actor and a prominent Bollywood figure, as well as a film producer and television host. Khan began his career appearing in several television serials in the late 1980s. He made his film debut in Deewana (1992). Since then, he has been part of numerous commercially successful films and has earned critical acclaim for many of his performances. Khan has won fourteen Filmfare Awards for his work in Indian films, eight of which are in the Best Actor category . In 2005, the Government of India honoured him with the Padma Shri for his contributions towards Indian Cinema.

Khan was born in 1965 to Muslim parents of Pathan descent in New Delhi, India. His father, Taj Mohammed Khan, was an Indian independence activist from Peshawar, British India. According to Khan, his paternal grandfather was originally from Afghanistan. His mother, Lateef Fatima, was the adopted daughter of Major General Shah Nawaz Khan of the Janjua Rajput clan, who served as a General in the Indian National Army of Subash Chandra Bose. Khan’s father came to New Delhi from Qissa Khawani Bazaar in Peshawar before the partition of India, while his mother’s family came from Rawalpindi. Khan has an elder sister named Shehnaz.

Growing up in Rajendra Nagar neighborhood, Khan attended St. Columba’s School where he was accomplished in sports, drama, and academics. He won the Sword of Honour, an annual award given to the student who best represents the spirit of the s chool. Khan later attended the Hansraj College (1985–1988) and earned his Bachelors degree in Economics (honors). Though he pursued a Masters Degree in Mass Communications at Jamia Millia Islamia, he later opted out to make his career in Bollywood.