Tauba Ki Fazilat – Virtue of Repentance in Urdu and English

Tauba Ki Fazilat , virtues of repentance of a young Muslim in the light of Ahadith of the Rasulullah sallallahu alaihe wasallam in Urdu and English languages.

As it is seen, it is stated above that the good characteristics that are listed above will be much better for the people who need them the most. Since a manager pass judgment on others so much, he will need justice more than anyone else. Generosity is better for the rich, because they have the opportunity to do the requirement of this characteristic. Everyone should be sensitive in religion but scholars who guide people and set an example for them should be more sensitive. Everyone needs patience. But a person who suffers from poverty should be more patient in order not to commit sins. Everyone needs repentance but it is good for the youth who are more inclined to commit sins. The feeling of shame (shyness) is good but when it exists in women, they will not show their beauty to others and they will avoid sins.

Now, let us concentrate on repentance by the youth.

The following hadith of the Apostle of Allah (PBUH), whose words have a light and hope, contains an important warning and good news for the youth.

Repentance is the penitence of a person who has sinned. Our Creator said, “O ye who believe! Turn to Allah with sincere repentance: in the hope that your Lord will remove from you your ills and admit you to Gardens beneath which rivers flow” (at Tahrim: 8)

Since the repentance is “penitence”, it should be performed by its doer personally. A person cannot repent for any other person. However, he/she can ask forgiveness for others because, forgiveness means asking to be forgiven by Allah and we can want this for others.

There are many hadiths that encourage repentance. As a matter of fact, while this hadith gives an important good news for sinners: “a person who has repented is like a person who has not committed any sins” (Ibn Majah, Zuhd:30), in the following hadith, the contentment of our Creator for His slaves who repent is mentioned. “No doubt that Allah becomes more pleased than a person who finds his lost cattle when one of His slaves repents.” (Ibn Majah, Zuhd: 30)

One of the names of our Creator is “Tawwab”. That is, He accepts repentances very much. This is so clear that our Prophet said that if people did not commit any sins, Allah would create new human beings and let them commit sins and forgive them. For, the existence of sinners and repenters is a requirement of Allah’s name “Tawwab”. The following verse states that repentance brings about love of Allah: “Allah loves those who repent.”

The prophet (PBUH) said to Abu Dharr (RA): Wherever you are, fear from Allah and do a good deed immediately after committing a sin so that it will destroy the sin. Besides, get along well with other people.” (Tirmidhi, Birr: 55)

So, it is necessary to repent after committing a sin along with a good deed. Thus, that sin is destroyed.

Why is repentance, which is so good, better in the youth?

Firstly, let us quote two verses that will explain the subject:

As it is seen, the real repentance is the repentance which is made during the summer of one’s life before indulging into the sea of sin. For, senses and talents are cleaner and nicer during the youth. Those who repent during the youth will spend their life with good deeds. Doubtlessly, regardless of age, repenting is certainly good and should be performed.

The verses and hadiths given above explain us how the following words are meaningless and silly; “You are still young. Eat, drink, and enjoy your life. Give up praying, you will pray when you get older”.

The following hadith should enable us to repent “Allah loves the youth who repent” (Jamiussaghir: 1866). There cannot be a greater bounty than Allah’s loving us. 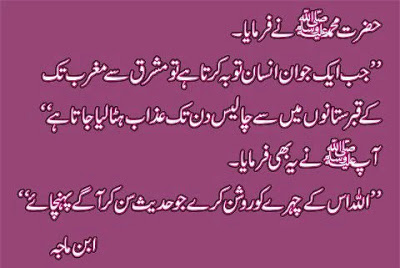 Nevertheless if we have committed too many sins or if we realize the truth when we get old, we should not be hopeless. The mercy of Allah is great. We should repent and seek forgiveness as much as possible and help the poor.

May Allah make our youth among His slaves who repent when they are young.