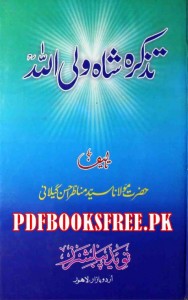 Tazkira Hazrat Shah Waliullah authored by Allama Syed Manazir Ahsan Gilani. Hazrat Shah Wali Ullah Muhaddis Dehlvi was born on 21st February, 1703 at Delhi, when the Aurangzeb Alamgir government was nearing its end. His real name was Qutbuddin, but he is well known as Wali Ullah, because of his goodness and piety. His father, Shah Abdul Rahim, was also a great Sufi scholar and one of the founding person and teacher of the Madrasa Rahimia Delhi. Shah Abdul Rahim was associated with the completion of the famous Islamic legal book “Fatawa e Alamgiri”.

Shah Wali Ullah has obtains his academic and spiritual education from his father. He memorized the Holy Quran and gained knowledge of Tafseer, Hadith, Sufism, Mysticism, Metaphysics, Logic, and Ilm-ul-Kalam. After mastering these subjects, he turned his attention to the Sahih Bukhari and Islamic Jurisprudence. He also studied medicine and Tibb. After acquiring this knowledge, he taught at Madrasa Rahimia for 12 years. He left for Saudi Arab in 1730 for higher education. During his stay in Saudi Arab, he was influenced by Sheikh Abu Tahir bin Ibrahim, a renowned scholar of the time. He studied in Madina for 14 years, where he obtained his degree in Hadith. It is believed that while Shah Wali Ullah was in Madina, he was blessed with a vision of the Holy Prophet (SAW), and tidings that he would be influential in organizing the reform of Indian Muslims.

This book described the interpretation and explanation of the life and thoughts of Mujaddid e Azam Hazrat Shah Waliullah r.a in Urdu language.