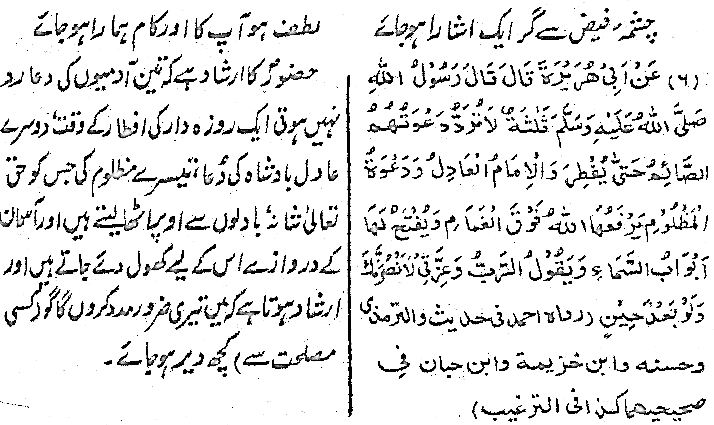 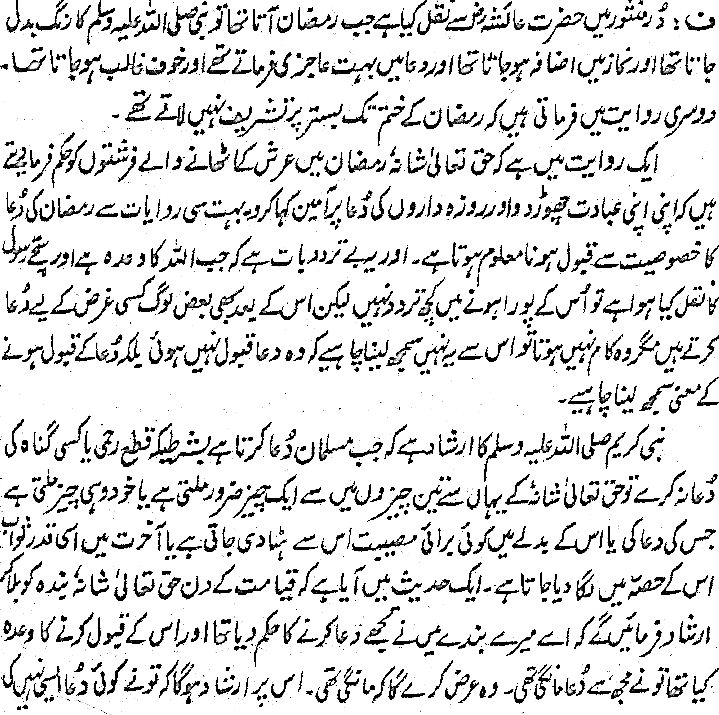 Hazrat Abu Hurairah (radiyallahu anhu) reports: Rasulullah (sallallahu alaihi wasallam) said: “There are three people whose duas are not rejected, the fasting person until he breaks the fast, the just ruler and the dua of the oppressed whose dua Allah lifts above the clouds and opens unto it the doors of heavens, and Allah says: “I swear by My honour, verily I shall assist you even though it may be after some time.”Note: In Durre Manthur it is reported fro Aa’isha radiyallahu anha that when Ramadan appeared, the color of Rasulullah’s (sallallahu alaihi wasallam) face used to change. He then used to increase salaat, became even more humble in his duas and had even more fear for Allah. According to another report he hardly ever lay down in bed until Ramadan came to an end. Further, it is stated that the Malaa’ikah carrying the Throne are commanded in Ramadan to leave everything else and recite “Aameen” to the Duas of those who fast. Numerous are such Ahaadith stating that the fasting one’s duas are answered. When Allah has promised and His truthful Nabi (sallallahu alaihi wasallam) has informed us, there should be no doubt whatsoever about the truth of these reports. Yet strange it is, that in spite of this, we still find such people who apparently do not get what they make dua for. They ask and do not receive. This does not mean that their duas have been rejected. One should at this point understand the meaning of dua being answered.

Rsulullaha sallallahu alaihi wasallam informed us that when a Muslim makes dua for anything from Allah, without having cut himself off from his near of kin and on condition that he does not make for any sinful thing, He definitely receives one out of the following three things:
He gets the exact thing for which he made dua. Secondly, if that is not received, Allah either removes from his path some great calamity in exchange for that which he desired, or the reward for that thing for which he made dua is stored for him in the Hereafter. Another Hadith states that on the day of Qiyaamah Allah will call his servant, and say to him: “O my servant, I used to command you to ask of Me and promised to answer. Did you beg of Me?” The servant will answer: “Yes i did.” Then Allah shall reply: You did not put forth any request which had not been accepted. You made dua that a certain calamity should be removed, which I did for you in the worldly life. You made dua that a certain sorrow should be cast off you and the effect of that sorrow was not even known to you. For that I have fixed for you such and such a reward.” Rasulullah sallallahu alaihi wasallam says that, that man shall again be reminded of each and every dua, and he shall be shown how it had been fulfilled in the world or what reward had been stored for him in the Hereafter. When seeing that, he shall wish that not single dua of his should have been answered on earth, so that he could receive the full rewards only in the Hereafter.