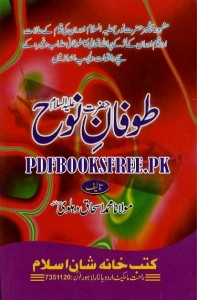 Toofan e Nooh Urdu authored by Maulana Muhammad Ishaq Dehlvi. Quranic story of Hazrat Nooh (a.s) his ship and the Ark of Sakeena. Nooh (a.s) is one of the most popular and principal Prophet of Islam.

Hazrat Nooh a.s was preached 950 years to his nation. But all in vain, and only few of them were converted to Islam. His nation was badly despite him. Therefore, Nooh (a.s) prayed for deliverance and then Allah Ta’ala told him to build a ship for the preparation of the coming of huge flood. His one son “Kan’an”(کنعان) was one among those who were drowned, and who were despite him for his pleading with him to leave the disbelievers and join Islam. Read the complete story in Urdu language. Click on the following links to read online or download Toofan e Nooh Urdu book in pdf format.