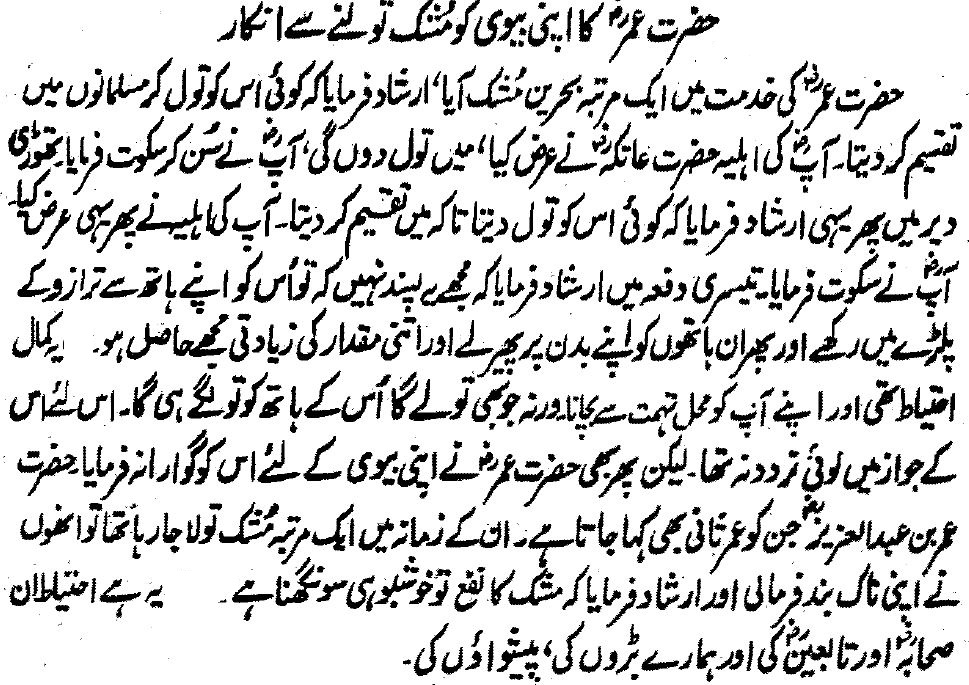 Hazrat e Umar does not Like His Wife to Weigh Musk

Hazrat e Umar (radiyallahu anhu) once received some musk from Bahrain. He said: ” I want someone to weigh it, so that it may be equally distributed among the Muslims.” His wife said: “I shall weigh it.” Umar kept quiet. A little later he again asked for someone to weigh the musk, and again his wife volunteered to do so. But he kept quiet this time too. When she repeated her offer for the third time, he said: “I do not like your touching the musk with your hands (while weighing it) and rubbing those hands on your body afterwards, as that would amount to something over and above my legitimate share.”
Any other person weighing the musk would, for that matter, have had the same advantage, but Umar (radiyallahu anhu) did not like this preference, particularly for any member of his own family. Look at this great anxiety to avoid charge of selfishness.
There is a similar story about Umar ibn Abdal Aziz (who is known as “the second ‘Umar’). While he was caliph musk belonging to the bayt al-mal was being weighed. He closed his own nostrils, saying: “The use of musk is to smell it”
These were the scruples of the sahabah, their successors, and of our elders in Islam.
← Previous Post
Next Post →