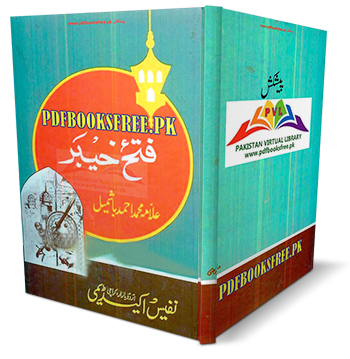 Fatah e Khyber in Urdu Written by Allama Muhammad Ahmad Bashmil. This version of Fatah e Khyber is an Urdu translation which is translated by Maulana Akhtar Fatehpuri. Fatah e Khyber (The Victory of Khyber) is one of most popular battle of the Prophet of Allah (peace be upon Him) which was fought by Rasulullah (Sallallahu Alihi Wasallam) before the Victory of Mecca. Some Islamic scholars and historians say that the battle of Khyber took place in the 6th year of Hijra but the majority of scholars says that it took place in the 7th year of Hijra.
Ibn Ishaq said when the Messenger of Allah (peace be upon Him) marched from Madinah to Khyber he went by way of Isr, and a mosque was built for him there; then by way of Al-Sahbih. Then he went forward with the army until he hatted in a valley called Al-Raji, halting between the men of Khyber and Ghatafan so as to prevent the latter reinforcing Khyber, for they were on their side against the Messenger of Allah (peace be upon Him). When Ghatafan heard about the Messenger’s attack on Khyber they gathered together and marched out to help the Jews against him; but after a day’s journey, hearing a rumor about their property and families, they thought that they had been attacked during their absence, so they went back on their tracks and left the way of Khyber open to Messenger of Allah (peace be upon Him).
Fatah e Khyber book in Urdu is now available on Pakistan Virtual Library for online reading and download. Click on the following links to read online or download the complete book in Pdf format for offline reading and references.