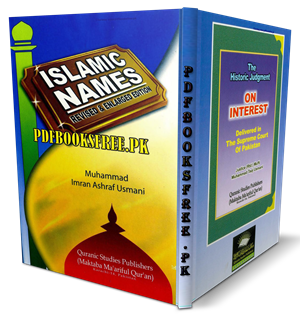 Choosing a suitable name for a child has always been a matter of interest for Muslim family. Whenever a child is born, parents search for a good name for his child. Islamic teachings have also encouraged the Muslims to select a meaningful and good name for their children. The Holy Prophet (sallallahu alaihi wasallam) has changed the names of several persons because they carried a bad sense.

It is reported by Abdullah ibn Umar (radiyallahu anhu) the well known Sahabi, that one of his sisters was named Asiyah which means ‘Disobedient’. The Holy Prophet (sallallahu alaihi wasallam) changed her name to ‘Jamilah’ (Beautiful).

Many scientists today have admitted that name of a person may influence his life, but the Holy Prophet (sallallahu alaihi wasallam) has revealed this fact to his followers 1400 years ago when he advised the Muslims to select good names for their children.

The names are also a source of identity of one’s religion. Therefore, the Muslims have been naming their children after the Prophets, the Sahabah (Companions of the Holy Prophet (s.a.w) and the pious persons of the Islamic history. Their names have thus been reflecting their Islamic identity. Unfortunately, this aspect of our lives is being neglected by many Muslims who do not bother to pay any attention to the meaning or any other association attached to their names. In their eagerness to follow the modern trends, they some times select a name for their children which is totally meaningless or carries a bad meaning or has an UN-Islamic background. For example, the female names like ‘Tahmina, Rubina, Nazli, have no meaning at all. The word Naaheed means a woman whose breasts are fully developed and it is a shame to call a woman with this name. Similarly, some Muslims girls are named as Naailah, which means calamity. Many boys are named as ‘Parvaiz’ while ‘Parvaiz’ was the name of a king of Persia who had torn the letter of the Holy Prophet (sallallahu alaihi wasallam) into pieces.

It is shameful for Muslim to name his child after such an enemy of Islam. It is also seen in some Arab countries that a person is named ‘Firaun’ which is the Arabic title of Pharaoh, the tyrant of Egypt who persecuted the followers of Sayyidna ‘Moosa’ (Moses) and was drowned in the sea as divine punishment.

In short, the selection of names for the children should not be taken lightly. It may bring serious results both in this world and in the Hereafter. However, the Muslims who are conscious of this fact need guide book which can help them in selecting a suitable name for their children. Some brief booklets are found to serve this purpose, but a more comprehensive book was still needed, specially for the Muslims living in the Western countries.

Mr. Muhammad Imran Ashraf Usmani who is a graduate of Darul Uloom Karachi undertook this task and compiled the present guide book to fulfill this need. He has collected the suitable names for the Muslims boys and girls from original Arabic resources, and has explained their meanings and their association. All the names are arranged in an alphabetical order and if some names are non-Arabic, their origin has been indicated before each. Where no such indication is found, it means that they are of Arabic origin. This is also a good collection of the suitable names which is easy to consult. It is hoped that it will assist the English knowing Muslims in acquainting themselves with good Muslim names and their meanings.

This book is now available for online reading and download on Pakistan virtual library. Check out the following links to read online or download the complete book in high quality Pdf document format and enjoy offline reading.