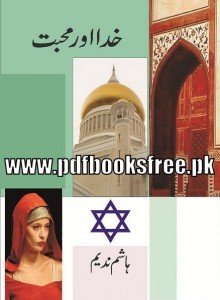 Khuda Aur Mohabbat Novel Authored By Hashim Nadeem. The story of Khuda aur Mohabbat revolves around the age-old conflict between religious ideology (Khuda) and human emotions. Belonging to the society’s elite, a young commerce graduate, Hammad accidentally sees Imaan, daughter of Moulvi Aleem, who teaches Quran to the children of the vicinity and is also an Imam in a nearby Mosque. This encounter brings a huge change to Hammad’s life. He left his house and family to keep close touch with Imaan. At one time, he becomes a porter. Imaan was engaged to her cousin Abdullah. She was under the shadow of his father, to whom she could not disobey. Imaan told Hammad to return to his family, but he refused Imaan. After realizing her helplessness, Imaan becomes tense and because of it she falls ill. The story ends when Imaan dies and Hammad loses his sense from this shock.

Khuda aur Mohabbat is the first novel of Hashim Nadeem which is being televised by a TV channel. The drama is inspired from the novel of the same name and considered as one of the best dramas serials in Pakistan. (Source)

Click on the below mentioned link to read online and download Khuda aur Muhabbat novel in Pdf format for offline reading.