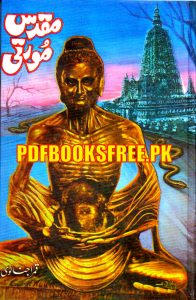 Muqaddas Morti (Sacred Icon) novel 2 volumes Written by Qamar Anjalvi. Every story of the world shows certain fact or it is a reflection of an incident. When the author starts to write any story, there are many incidents in his mind instead of the central idea which he arranges around the focus point in a very articulate manner. The fact of thoughts and incidents would be more interesting for the readers if it is more related with the logic of facts or circumstances and the readers thus take immense interest in the story. The story of “Muqaddas Morti (Sacred Icon)” also reflects certain facts. The plot of which consists of Buddhists relics and beliefs.
This belief has been present in India for centuries that Aishwar (God) born in the shape of certain human beings. According to this belief Shri Ram Chander ji, Shri Krishna ji and Buddha are considered the replica of Aishwar. Quran also says that GOd has sent reformers, Prophets and Messengers for every nation of the world. The learned people found the religious leaders and reformers in the light of above mentioned theory. Buddha was the first reformer and the saint who raised voice against the human distinctions and racial divisions and laid the foundation of equality and this was probably the cause of his popularity. About 80 years ago Buddhism was the biggest religion of world which came into existence five hundred years ago before the birth of Jesus Christ.

In India, it was considered that religious leaders where the replica of Aishwar and thus their sacred icons (images) were worshiped as Bhagwan. Most of the Icons made in the world were of Buddha and he was worshiped more than Shri Ran Chander Ji and Shri Krishna Ji because Buddhism was spread not only in India but also in Far East. Buddha was not the follower of demi-Gods (Devtas) he believed in the oneness of God and believed in the doom day of Judgement that is why he laid the foundation of Nirvan philosophy on the basis of reward for good deeds. He believed in the gyan and ilham (Inspiration, revelation) that is why he made a well for his follower before his death that his ash might not be worshiped after his death. But it is an interesting fact that he is the most worshiped person of the world. It was tried to banish the Buddhism from India by spoiling its education but even then followers of Buddhism excepted this religion.
The biggest aim of written the story of “Muqaddas Morti” is to convey the real shape of Buddha teaching and beliefs in untouched way to the readers.

This novel is now available on Pakistan virtual library for online reading and download. Check out the following links to read online or download it in Pdf format to enjoy offline reading.