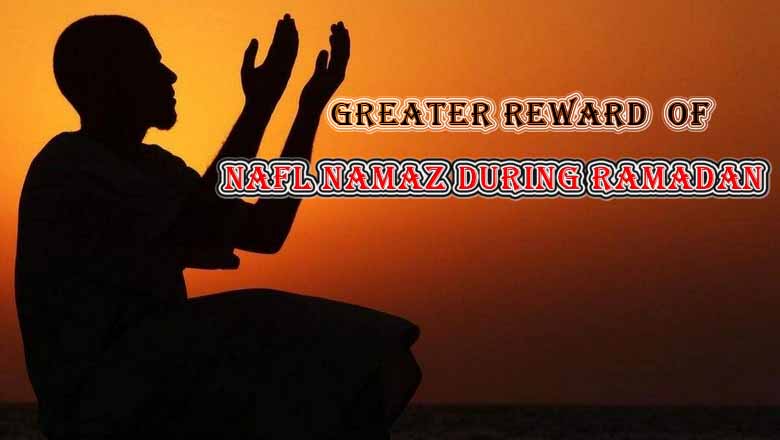 Rasulullah sallallahu alaihi wasallam informed us that any nafl deed in Ramadan is rewarded as much as a fardh in normal times. Whereas a fardh in Ramadan carries the reward of seventy faraa’id of other times.
So keep praying more and more nafl in this ramadan and get much more rewards. At this point we should ponder over our Ibaadah. How much importance do we attach to it in Ramadan? How much Nafl do we perform? As for fardh deeds we observe how numerous people who after having eaten sehri (sower suhoor), get back into bed with the result that Fajr salaat goes by without being performed . Many perform it, but not with jama’ah. It gives the impression that we give thanks to Allah for the food we had eaten at sehri by not performing the most important fardh or by not performing it with Jama’ah. It remains incomplete. Rasulullha (s.a.w) said that: “There is no salaat for those near the masjid except in the masjid.”

In the book ‘Mazaahire Haq” we find that when a person, without any valid excuse, performs salaat without Jama’ah, the fardh has been performed; however reward for the salaat is not received.

Similarly, in numerous cases at the time of iftaar (Boka) Maghrib salaat is missed, and many who do come to the masque  miss the takbeer at the beginning or miss the first rak’ah. Many people because of the Taraweeh salaat even perform Eshaa salaat before the time. Some do not pay any attention to salaat even in Ramadhan.
That is the way we look after our ibaadah in Ramadhan. Some times in order to perform one fardh three are destroyed. How often do we not see even Zuhr salaat going by because we are asleep, while Asr goes by because we are too busy buying , selling and cooking to prepare for Iftaar.
If such is the case with the faraa’id, then we can imagine how much less importance is given to the nafl actions. One finds that because of sleep. Salaatul Ishraaq (after sunrise) and Salaatud Duha (before noon) go by. Then what about Salaatul Awwaabeen (just after Maghrib)? Here we find ourselves busy with iftaar and when thinking about Taraweeh after about an hour this salaat too is wasted. Further we find that for Salaatul Tahajjud the time is the same as that for sehri with the result that his too goes by. One may make a thousand excuses for not finding time for these nawaafil, yet we see that there are many who do find the time to do all these ibaadah’s during these precious moments.