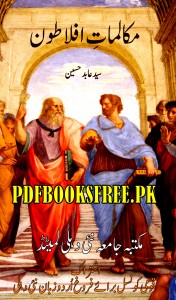 Mukalmat e Aflatoon Urdu version by Syed Abid Hussain. Mukalmat e Aflatoon book contain translation of the dialogues of Plato English version by B. Jowett. Plato, the greatest philosopher of ancient Greece, was born in Athens in 428 or 427 B.C.E. to an aristocratic family. He studied under Socrates, who appears as a character in many of his dialogues. He attended Socrates’ trial and that traumatic experience may have led to his attempt to design an ideal society. Following the death of Socrates he traveled widely in search of learning. After twelve years he returned to Athens and founded his Academy, one of the earliest organized schools in western civilization. Among Plato’s pupils was Aristotle. Some of Plato’s other influences were Pythagoras, Anaxagoras, and Parmenides.
Plato wrote extensively and most of his writings survived. His works are in the form of dialogues, where several characters argue a topic by asking questions of each other. This form allows Plato to raise various points of view and let the reader decide which is valid. Plato expounded a form of dualism, where there is a world of ideal forms separate from the world of perception. The most famous exposition of this is his metaphor of the Cave, where people living in a cave are only able to see flickering shadows projected on the wall of the external reality. This influenced many later thinkers, particularly the Neoplatonists and the Gnostics, and is similar to views held by some schools of Hindu dualistic metaphysics.
Plato died in 347 B.C.E. In the middle ages he was eclipsed by Aristotle. His works were saved for posterity by Islamic scholars and reintroduced into the west in the Renaissance. Since then he has been a strong influence on philosophy, as well as natural and social science.
Although the exact order of the dialogues is not known, the following is a consensus ordering based on internal evidence:
In these dialogues, Socrates are the central character, and is believed to be expressing his own views. These are the only remaining record of Socrates’ teachings; hence these are known as the Socratic dialogues.
These dialogues of Plato was translated into Urdu by Syed Abid Hussain, which is now available to read online and download. Visit the following links to read online and download complete Mukalmat e Aflatoon book in Pdf format for offline learn and references.