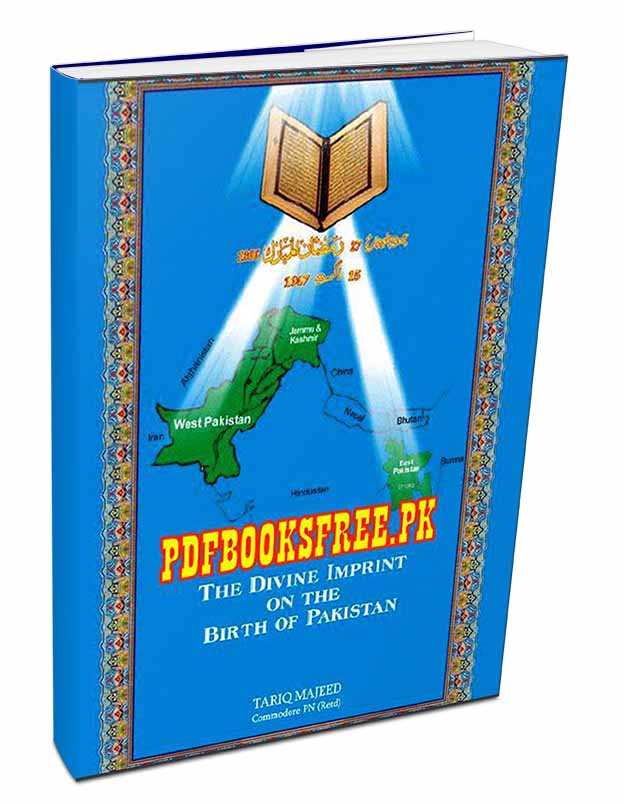 The Divine Imprint On The Birth of Pakistan  authored by Tariq Majeed. Pakistani intellectuals, no doubt, have produced many outstanding books on various aspects of Pakistan Movement, Two Nation Theory and the Birth of Pakistan, and on the two distinguished personalities, Allama Muhammad Iqbal and Quaid-e-Azam Mohammad Ali Jinnah, who were key contributors to its independence. However, a full-length, fully-documented, officially-recognized and comprehensive history of the establishment of Pakistan, including its singular origin and nature, has yet to be written. Similarly, the requirement of a profound work on Nazria-e-Pakistan, has yet to be met; Nazria in this case meaning both the Ideology and the Purpose of Pakistan.

What is presented in this study closely concerns, indeed embraces, both the unique Birth and the unique Nazria of Pakistan. It is hoped the facts and the conclusions brought out in it would enlighten the readers on these features of our Country and would find appropriate mention in the future literature on them.

Does God intervene in the affairs of individuals and nations? Yes, He does.

And we should remember, though we tend to forget it, that the Creator hears, sees and knows everything, including what is in the hearts of the people, and that whatever is happening on the Earth and in the Universe is according to the intentions of His Plan. A poet has described it in captivating verses:

Allah Almighty, in fact, is intervening all the time in the lives of men and nations helping, warning, testing, punishing or rewarding them, as they deserve by their actions and intentions. The method of His intervention is usually indirect and, although it comes as an unexpected, abnormal development or event, it occurs in such a way as it appears to be a part of the normal ups and downs of worldly matters. Besides, it requires genuine faith, some understanding of God’s Sunnah or Practice, and ability to ponder and analyze the circumstances in which such an event occurred, to know its real nature. As such, most people do not recognize divine intervention in their personal affairs or in the affairs of their countries or in those of the world at large.

Sometimes the divine forces create events or changes that defy normal explanation and cannot be attributed to natural causes. People are expected to recognize them as God’s direct intervention, and to deduce and learn the appropriate lessons from them. However, human ego or rather arrogance, spurred by a lack of faith, still tries to come up with ‘worldly’ explanations for them. There are only a few who are wise or humble enough to see the Hand of God in such cases and to take heed.

In certain rare situations Allah’s intervention is not only direct but also is accompanied by circumstances that show the situation concerned to be an undeniable act of divine will. Its occurrence may be as a punishment or as a favour for a people. Such a situation is always momentous in nature and gives a clear signal that Allah intends the recipients to have no doubt about its origin and purpose.

If such a direct and irrefutable intervention is meant to bestow a great favour on a people, they are certainly most fortunate and privileged. They should reflect upon it with utmost priority, attention and sincerity and determine what it was in their circumstances, which appealed to Allah to favour them so visibly, and what responsibilities He required them to fulfill now. If their effort is sincere, they should be able to see the exceptional situation, in its glorious true reality, that had been created for them. They will literally see and feel the presence of divine power. Their hearts and minds will be filled with tremendous inspiration and renewed faith, and with the dynamic spirit that can face any challenge of life.

These assets, besides giving other benefits, give the people the ability to become aware of both their strengths and weaknesses and to know the real nature of the perils and problems facing them and how to deal with them.

This writer firmly believes that God had blessed Pakistan with that exceptional situation. Study and learn about it, obtain from it the treasure of assets and energies it holds, and seek to know the key for making it happen again. God’s direct intervention to favour a people can always occur again if the people can learn how to invoke it.

An Untold Story “The Divine Imprint On the Birth of Pakistan” exposition is on a rare and fascinating topic. It is best to study it with an open but thoughtful and, by all means, a questioning mind. It will not fail to clear any doubts or questions you may have. It will, Insha-Allah, give you immense inspiration and a wonderful new insight into the meaning and purpose of the Islamic Republic of Pakistan as well as your own life.

The Divine Imprint on the Birth of Pakistan book is now available on Pakistan virtual library in high quality Pdf document for the study of our visitors. Check out the following links to read online or download the complete book in Pdf format and enjoy offline reading in your computer and smartphone.