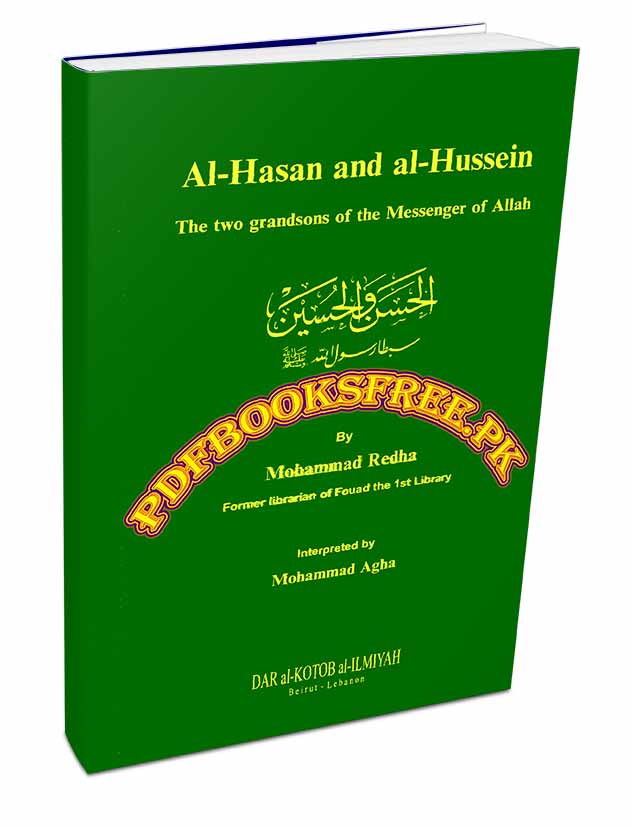 AI-Hasan and al-Hussein the two grandsons of the Messenger of Allah (peace be upon him) Written by Muhammad Redha the former librarian of Fouad the 1st library. The story of al-Hasan and al-Hussein is a real tragedy. They are the grandsons of the Messenger of Allah, to whom may Allah’s Blessings and peace be granted; the sons of Ali Ibn Abi Taleb, may peace be upon him, and Fatema the daughter of the Prophet Muhammad. But their honourable placing did not prevent their enemies from plotting and aggressing against them.

The tragedy of al-Hasan and al-Hussein grows greater as they are two virtuous members of Ahlul Bait, the family of the Prophet, to whom may Allah’s Blessings and peace be granted, and the two beloved grandsons of the Prophet whom He called the two sweet basils; and the masters of al-Jannah (Paradise).

Allah, Be He exalted, said: “Verily, willeth Allah to keep away from you every unc1eanliness. 0, Ahlul-Bait! And to purify you thorough purifying”.

Al-Hasan, for whom may Allah’s good pleasure is prayed, was wise, patient, generous, pious, peace-loving, hating seditions and blood-shedding. He never uttered a bad or dirty word. He set examples in generosity and self-denial. He was areal example to follow.

The two grandsons of Prophet Muhammad, to whom may Allah’s Blessings and peace be granted, were raised by their pious, wise and courageous father, Imam Ali Ibn Abi Talib. They grew in a high-quality manner and were bred on virtues in a social environment which is the most honourable and the most honest at that time, the environment of Fatima al-Zahra r.a, the daughter of the Messenger of Allah and the lady of world’s women.

Prophet Muhammad, to whom may Allah’s Blessings and peace be granted, used to educate them and to take care of them all the time.

When the Messenger of Allah was praying and as he prostrated al-Hasan and al-Hussein used to jump on his back. And when they tried to prevent them he gave them a sign by his hand to leave them both up; and he used to keep them into his lap saying: “He who loves me must love these two”.

” I saw the Messenger of Allah, to whom may Allah’s Blessings and peace be granted, on the pulpit and al-Hasan Ibn Ali was with him. He said as he looked at people one time and at al-Hasan another: My son, this, is a master! May Allah make conciliation between two Muslims groups”.

He added: “When he took over as caliph he did not shed blood at all”.

Al-Hasan and al-Hussein acquired fluency, reason, cool-mindedness, generosity and wisdom from their father and grandfather. They were taught Quran and interpretation from their father Ali may Allah honour him, and from their family members and the great companions. They also received education on Prophetic tradition (Hadith) from them.

Furthermore, he was unable to reunite Muslims and to make them rally behind him. For this, he wanted to spare the blood of Muslims and to come to terms with Mou’awiya.
Al-Hasan abandoned Caliphate to Mou’awiya on the condition that he would be the caliph after him. And Mou’awiya accepted this condition, but he, later, broke his promise and appointed his son Yazid as successor.
Some historians said Mou’awiya conspired with Ja’ada (Al-Hasan’s wife) and poisoned him so as to make it easy for him to appoint his son Yazid as caliph after him.
When Amr Ibn al-A’ss and other Mou’awiya’s companions told the latter (Mou’awyia) to summon al-Hassan to swear him and his father, Mou’awiya said: “I swear by Allah, I have always felt afraid of his presence and his criticism of my defects”
He summoned him and they uttered the ugliest swear words against him and his father Ali, may peace be upon him. The Ommayads harboured hatred against Ali and his sons. So, hatred turned them into blind. Their talk was illogical and a mere swearing, whereas al-Hasan, for whom may Allah’s good pleasure is prayed, was logical and true in his defence of his father and Ahlul Bait (the family of the Messenger of Allah, to whom may Allah’s Blessings and peace be granted.)
Objective critics and analysts said: “This is one of the most wonderful debates”.

Al-Hasan emerged victorious over the chiefs of Bani Ommaya (the Ommayads.). He left them unable to know what to say. He left them humiliated and feeble. By his reply to them, al-Hasan proved he was a real outspoken who does not stammer or fear anyone when he wants to say the word of right and truth. He also proved he possessed an iron will and a great courage.

He also said: “The destruction of people lies in three things, Haughtiness, stinginess and envy!
Haughtiness is the destruction of religion and by it satan was damned.
Stinginess is the enemy of the self and by it Adam was driven out from Paradise.
And envy is the core of evil by which cane killed Abel”.
AI-Hussein’s tragedy was more painful. He was a true defender of Islam’s purity and right puth. He was known for his reason, good nature, faith and wit.
He was similar to the Prophet, to whom may AIlah’s Blessings and peace be granted. The Messenger of Allah, to whom may Allah’s Blessings and peace be granted, said: “Hussein is apart of me and I am apart of Hussein. He who loved Hussein loved Allah. Hussein is the grandson of grandsons. Al-Hasan and al-Hussein are my two Raihanat (Basil plants) of the world. He who wants to get pleased by looking at a man from the people of al-Jannah (Paradise) let him look at Hussein!”.
The Prophet also used to carry al-Hussein on his shoulders saying: “0, Allah! I love him. May thee love him!”.
When Mou’awiya appointed his son Yazid as his successor and ordered his rulers to get forcibly the pledge of allegiance for him from all the people, particularly the Shiites (Supporters of Ali Ibn Abi Talib r.a), he told his son Yazid: “I don’t fear any hody in Quraish but three men: Al-Hussein Ibn Ali, Abdullah Ibn Omar and Abdullah Ibn al-Zubair”.
Al-Hussein Ibn Ali is a witty man. I hope that Allah is sufficient for your support, as al-Hussein’s father was killed and his brother was let down. He has a pure descent and a great right as well as kinship with Muhammad.
Al-Hussein did not give the pledge of allegiance to Yazid for he, the latter was away from being committed to Islam in faith and in practice. He was busy with his personal entertainment and interests!!!

So, al-Hussein told Kufa people:
“0, people, the Messenger of Allah, to whom may Allah’s Blessings and peace be granted, said: He who saw an unjust Sultan (ruler) acting what Allah hath forbidden and breaking the pledge of Allah, contradicting the sunna of the Messenger of Allah, and adopting the behavior of atrocity and aggression, thereby resisting him neither by act, nor by saying, Allah shall punish him”.

So, al-Hussein felt it was his duty to warn people against the dangers of these acts which contradict the very essence of Islam. AI-Kufa people were with al-Hussein in their Hip-service but they backed the Ommayads by their swords. They cheated him and betrayed him.
Yazid’s ruler sent the army to fight al-Hussein who went to al-Kufa with his family and companions. Al-Hussein had no army; but some men who defended Him to death. The killing of al-Hussain represented a very ugly crime. Obaidullah Ibn Ziad, the ruler of Yazid in Iraq was a real criminal who knew no mercy. He killed all Muslims who showed support for Ahlul Bait. His army mutilated and beheaded al-Hussein, his family members and his companions.

He sent their heads to Yazid and got his reward from him.

AI-Hussein’s true words and faith were not sufficient. He needed the might of swords to back his right. So, might conquered right and evil prevailed.

AI-Hussein’s story remains with very tragic lessons from which historians learned. Faith needs to be backed by might and strength. Right alone is not sufficient.
AI-Hussein said: “I swear by Allah, I never lied since I knew that Allah dislikes its people (the people who lie) and punishes those who fabricated them.

This book deals with the biographies of al-Hasan and al-Hussein, the two sons of Ali Ibn Abi Taleb, for whom may Allah’s good pleasure is prayed. Al Hasan and Al Hussain book is now available here on Pakistan virtual library for online reading and download. Check out the following links to read online or download the complete book in Pdf format for offline reading and references.