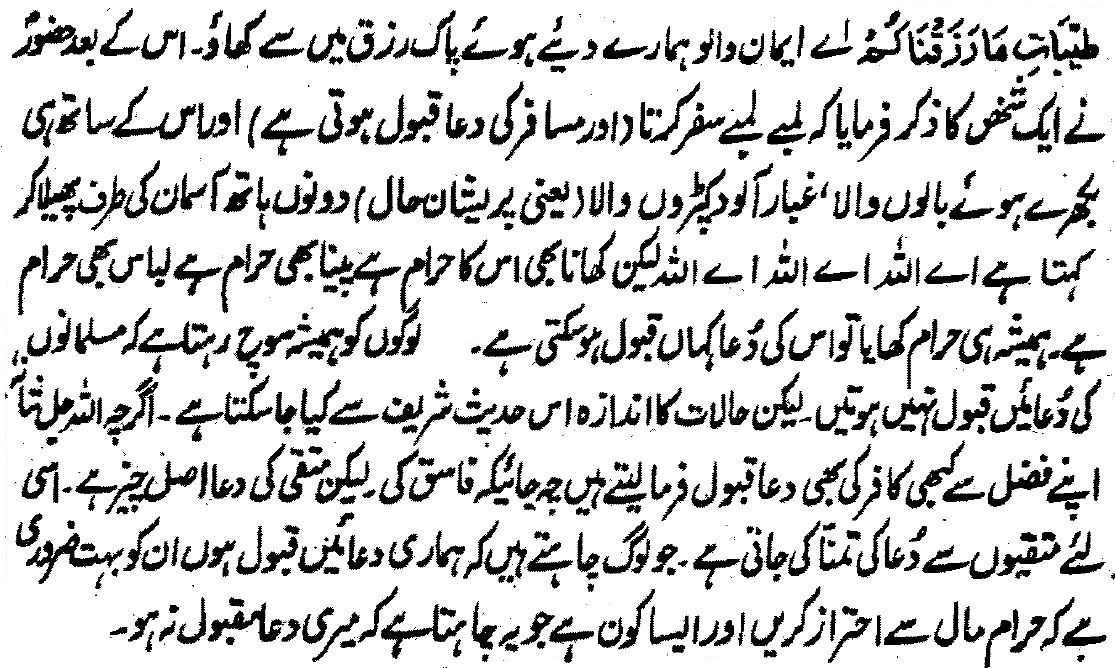 Rasulullah (sallallahu alaihi wasallam) once said: “As Allah Ta’ala Himself is pure He accepts only pure things. He enjoins upon the Muslims what He has laid down for His Rasuls. He says in His Book: “O Rasuls eat of the good things and do right. Lo! I am aware of what ye do (al-mu’minun 51) and: “O Ye who believe! Eat of the good things wherewith we have provided you (al-baqarah 172).”
Then Rasulullah (sallallahu alaihi wasallam) described a traveler with untidy hair and dusty clothes, who raises his hands towards the sky, he calls out: “O Allah! O Allah!,” but his food, drink and clothes all were from sources forbidden by Allah Ta’ala. So, Allah Ta’ala would never listen to him and answer his dua (Pray), even though his outward condition showed him deserving.
People wonder why the dua (pray) of the Muslims are not always fulfilled by Allah Ta’ala; the reason is easy enough to understand in the light of the above Hadith. Though Allah Ta’ala does sometimes grant the dua of even a nonbeliever (not to mention the dua or requests of a sinful Muslim), but it is particularly the dua of a pious person that is seldom rejected. That is the reason why people generally seek the dua of such persons for themselves. It follows that those who wish to have their dua often granted must abstain from forbidden things. No wise person would like to run the risk of his dua being rejected.